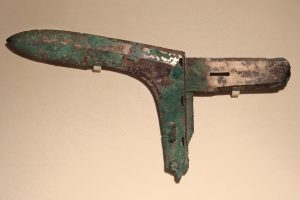 Many remains found in the tomb of Emperor Qin Shi Huang reveals that the soldiers of Terracotta Army used the crossbows in ancient China during the warfare. It was basically used as a weapon and a toy. During the Han Dynasty, the use of crossbows had become the main weapon. During that time, it had become the military projectile weapon.

The repeating ancient Chinese crossbow was developed with an automatic reloading system. During the Han Dynasty, these weapons were mainly used for infantry engagements and also sometimes for cavalry engagements. In 4th century BC, oldest crossbow stocks with bronze triggers were found in a grave in Hunan.

The earliest crossbow bolts were found in China in a grave in Hubei which dated back to 5th century. These discoveries reveal that crossbows were used in China since ancient times. There are many literary records available which stressed the fact that crossbows were used in the ancient China. Sun Tzu’s book The Art of War (500-300 BC) says about the use of crossbows in the 12th chapter and also about its traits in the 5th chapter.