Often, the Tang and the Sui dynasties are discussed in tandem and the Tangs ruling the country through the canals, granaries and other means of transport built by Sui. The Tang dynasty ruled China from 618-907 A.D. The administrative system that was established from the 3rd and 4th centuries B.C. was further expanded by the Ancient China Tang Dynasty. 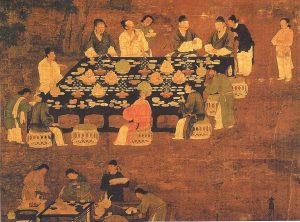 The Tang rulers also enhanced the judicial system. In 624 A.D. they compiled the Tang Code, which is the first complete Chinese code formulated and which exists even today. The Tang Code comprised of more than five hundred articles that were divided into twelve sections.

Yet another major contribution of the Tang dynasty was the land distribution program, which was the highlight of their agricultural reform and their economic planning.

According to this program, it was envisioned that the peasants would have adequate land to support themselves and to pay taxes. The taxes too were based on the number of people in the family, which was a revolutionary step in economic reforms.

The agricultural reforms and other techniques like planting out seedlings, systematic selection of varieties, use of tools like the chain with paddles, the harrow, and the rice field plow yielded results with a major increase in the production of rice.

The Tangs increased their military strength greatly. They embarked on territorial expansions and managed to acquire a large area of central Asia all the way into Iran, Manchuria and almost the whole Korean peninsula along with the Ili valley. The Tang became the greatest power in Asia.

One of the highlights of the Ancient China Tang dynasty is the presence of women rulers. In fact, the Tang was the only dynasty to have a female empress. A concubine called Wu Chao ruled the country after dislodging the legitimate heir. She became the empress in 690 AD and was regarded as Emperor Tse-Tien.

With her ascendancy to power, the Tang dynasty was disrupted briefly and the Chou dynasty began that lasted for 15 years.

After Wu Chao, the Tang dynasty came back to power. The Tangs deleted all the regressive policies of Wu Chao and the political, administrative and economic life was restored back to normal.