The collection of Ancient China Artworks features a wide variety of different art forms. Some of these were already prevalent in other countries whereas there are a number of art forms that the Chinese are credited with developing.

Use of Different Material in Ancient China Artworks

The earliest artwork from the Ancient Chinese region made use of rocks and stones as the medium of expression. Of all the Chinese arts and crafts, the most representative are Bronze Vessels, Folk Toys, Embroidery, Calligraphy, Music, Opera, Painting, Cloisonne, Jade, Kites, Lacquer Ware, Paper-Cuttings, Porcelain, Pottery, Seals, and Silk. 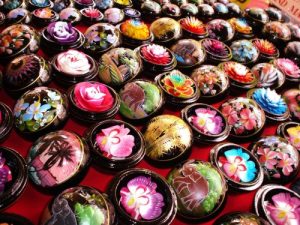 The Chinese people used rare and precious bronze to cast large quantities of ritual vessels, musical instruments, and weapons that were elegant in form, finely decorated, and clearly inscribed with Chinese characters. They affirm the artistic achievement of ancient China.

In ancient China, bronze was employed primarily for the casting of ceremonial temple vessels used in sacrifices to the gods of heaven, earth, the mountains, and rivers. They were also used in vessels for banquets, honor awards, and funerals for the nobility.

Ancient Chinese Artworks also included pottery. Chinese accomplishments in pottery works can be seen from Terra Cotta Warriors, in Xian, Shaanxi Province, and the Tricolor Glazed pottery of the Tang Dynasty and further.

Gu Kaizhi, a famous painter of the Jin Dynasty, was good at presenting historical themes. His painting The Nymph of the Luo River portrayed poet Cao Zhi.s meeting with the goddess. The Tang and Song dynasties were the golden age of Chinese painting. The Tang painter Wu Daozi called the Sage Painter.

He was an expert at a figure and landscape painting. Riverside Scenes at the Qingming Festival, a genre painting of significant historical value done by the Northern Song Dynasty painter Zhang Zeduan, depicts the bustling scene in the then capital during the festival. The Tang painters Li Sixun and Li Zhaodao, who were father and son, used mineral substances as a pigment to paint landscape paintings, which were called magnificent landscapes.

Cloisonne is one of the Ancient Chinese artworks. It is an enamel artwork with the primary color being blue. It is renowned for its use of high-quality material, complex manufacturing process and its use of bright and vivid colors.

One of the unique art forms that developed in China during the first century was the art form known as papercuts. The papercut artwork would be used to decorate the homes of people and some women would even use them in their hair.