Ancient Chinese Ceramics industry has a long history for about 1700 years. In the beginning, pottery was made by just pushing a hole into a ball of clay, or by making a long snake of clay and coiling it up into a pot shape. The pottery was made of clay in a fire after modeled and dried as Chinese ancestors knew that clay was of long-standing. 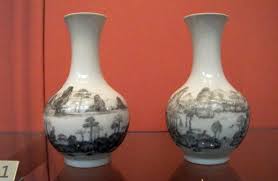 Early in the primitive society, they used it in all respects. They found the clay became glutinous and plastic after soaked in water and hard after dried in the sun.And they started to use fire in Yuanmou people Age. During the long living period in the primitive society, they found the dried clay became harder and waterproof after heated in a fire and hence the pottery was invented with the dried clay.

Besides the two series of celadon and white ceramics, the black glaze, the blue and white glaze and color painting ceramics sprang up everywhere. By the end of the Shang Dynasty, both the ceramic and the bronze industries had evolved into complex systems of production that were supported by the aristocracy. Decorative designs have rich symbolic meaning and inscriptions provide important historical documentation. Ceramic industry presented a picture of prosperity.

The peak of Chinese ceramic production was seen in the reigns of Kang Hsi (1622-1722). Yung Cheng (1723-1735) and Chien Lung (1736-1796) of the Ching dynasty during which improvement was seen in almost all ceramic types, including the blue and white wares, polychrome wares, Wucai wares, etc. The improved enamel glazes of early Ching dynasty being fired at a higher temperature also acquired a more brilliant look than those of the Ming dynasty.

The production of glazed proto-porcelain was a significant achievement in Chinese ceramic history. It was a process for Chinese porcelain to develop from lower to higher, from primitive to relatively mature.Early in Shang dynasty (3,000 years ago), primitive celadon already appeared. After 1,000 years, mature celadon was manufactured in Eastern Han.

Eastern Han was an important milestone in Ancient China Ceramics. The widely praised Chinese ancient porcelains have become one of the precious treasures in varies museums all around the world.

After 300 years development through three kingdoms, Eastern and Western Jin, Northern and Southern Dynasties and Sui dynasty, Chinese politics was steady and the economy was booming in Tang Dynasty Society progress promoted the development of a ceramic industry.