Ancient Chinese Civilizations Overview was ruled by a series of emperors from different dynasties. These dynasties were royal families. Early Neolithic agricultural villages appeared in Chinas Yellow River Valley about 4,000BC.

Others developed along with other rivers like the Huai and the Yangtze. After 10,000 BC people in China lived by hunting and gathering plants. Then, about 5,000 BC, the Chinese began farming. 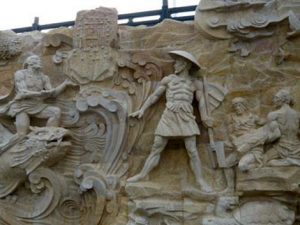 The earliest crop was millet, followed by millet, rice, wheat, cabbage, and soybeans, among others. Early Chinese also domesticated animals, made pots for the storage of grain and liquids, and owned weapons. Little is known about religious beliefs or practices, although it is thought that ancestor worship was important. The Chinese have been ruled by a succession of dynasties.

The Xia family would have ruled China from around 2100 B.C. until around 1800 B.C. They are believed to have been Aryans, who migrated into the area, and who were able to conquer the local peoples using their superior weaponry and technology.

The Shang dynasty created a highly organized state. Though they ruled only a part of China their cultural influence spread through most of it. The Shang practiced polytheism (worship of many gods). The most important god was called Di. During the Shang dynasty, the practice of ancestor worship began. The Shang built the first real cities in China. During the Shang era, slavery was common in China. Prisoners of war were made into slaves. Human sacrifice was still practiced.

The Zhou dynasty ruled China from about C. 1022 BC to 221 BC. In those days because transport and communications were very slow it was difficult for a ruler to control a wide area. The Zhou kings solved this problem by creating a feudal state. There were some important technological changes during the Zhou period. The most important was the invention of the iron. It was used for weapons as early as 650 BC. During the Zhou era parts of the Great Wall of China were built.