The first Ancient Chinese Drama was sprouted in Zhou Dynasty, which mostly appeared in sacrificial rites. Until Song Dynasty, the miniature of drama started to form. The miscellaneous drama was the representative.

When people died with ardent love for miscellaneous, the carving bricks of miscellaneous drama would become the most widespread grave decorating. They appeared in the tombs of people of Song and accompanied with these drama fans forever.

Nuo opera or Nuo drama deemed the living fossil opera, was one of the most popular folk operas in southwest China and has a long history since the ancient times. Characterized by its special features such as ferocious masks, unique dresses, and adornments, the strange language used in performance, the Nuo opera became a popular form of Chinese drama.

The Tianjin Museum deploys the display of Tianjin Theatre, which exhibit theatre in Tianjin from Han Dynasty (206BC 220AD) to the contemporary time. There are references to theatrical entertainments in China as early as 1500 BC during the Shang Dynasty; they often involved music, clowning, and acrobatic displays.

During the Tang dynasty, Emperor Xuanzong formed an acting school known as the Children of the Pear Garden to produce a form of drama that was primarily musical. During the Han Dynasty, shadow puppetry first emerged as a recognized form of theatre in China. In the Sung Dynasty, there were many popular plays involving acrobatics and music.

They developed in the Yuan Dynasty into a more sophisticated form with a four or five act structure. Yuan Chinese Drama spread across China and diversified into numerous regional forms, the best known of which is Beijing Opera, which is still popular today.

Other popular forms of plays in ancient China:

Other popular forms of plays in ancient China were the dragon dance and lion dance which originated in the ancient Chinese culture. The Dragon Dance itself originated during the Han Dynasty and was started by the Chinese who had shown great belief and respect towards the dragon. 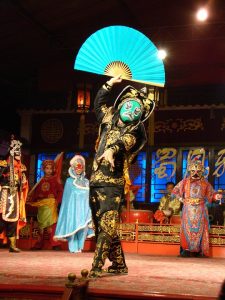 It is believed to have begun as part of the farming and harvest culture, also with origins as a method of healing and preventing sickness. It was already a popular event during the Song Dynasty where it had become a folk activity and like the lion dance was most often seen in festive celebrations. As the dragon gave people a feeling of great respect, it was often called the Sacred Dragon.

The emperors of ancient China considered themselves as the dragon. The Dragon was also the emblem of Imperial Authority since the ancient times. It symbolizes supernatural power, goodness, fertility, vigilance, and dignity. In the Qing Dynasty, the Dragon Dance team of the province of Foochow had been invited to perform in Peking and had been greatly praised and admired by the Qing Emperor, which earned great fame for the team.

Lion dancers were broadly categorized into three styles, Chinese Northern, Chinese Southern, and Taiwanese. The Chinese Northern dance was used as entertainment for the imperial court and elsewhere. The northern lion was usually red, orange and yellow (sometimes with green fur for the female lion), shaggy in appearance, with a golden head. The northern dance was acrobatic and included dangerous stunts.

The Chinese Southern dance was more symbolic. It was usually performed as a ceremony to scare away evil spirits and to summon luck and fortune. The Chinese southern lion exhibited a wide variety of color and had a distinctive head with large eyes (of an eagle), a mirror on the forehead (demons are supposedly scared of their own reflection), and a single horn at center of the head (depicting the horn of the unicorn).

Lion dance costumes were considered to be spiritually protective when used as they were traditionally blessed before usage.

Chinese drama forms are still carried out with equal enthusiasm and devotion by the people, and every aspect of the culture is still respected as it was in the ancient times.