Ancient Chinese Furniture History offers insights into Chinese culture as well as an array of craftsmanship styles. Prior to the fourteenth century, Chinese furniture had not attained the fine details now associated with its construction. Such craftsmanship had not yet received recognition due to factional wars between the states. Gradually, furniture construction increased and, with this, designs started became more and more refined, a trend that would continue over time. 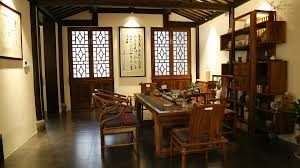 After the Ming dynasty (1368-1644), Ancient Chinese furniture craftsmanship found its own identity. The furniture produced during this period was quite simple with little decoration and a few sparse lines were drawn distinctly to differentiate the legs and resting bars of tables and chairs, and the back of an armchair.

In those days, furniture was limited to armrests, low-level tables with minimalist and simplistic lines. The main emphasis was placed on the application of the natural beauty of the wood texture and adopting latticework and openwork carving. On eye-striking places such as the backs of armchairs, there would be simple patterns by relief engraving or openwork carving.

It featured fine and durable precious woods, such as Mahogany, sandalwood, and rosewood etc. In the Ming dynasty, the demand for fine furniture, the ample supply of wood and the highly developed tenon-mortise technology all facilitated the success of the Ming furniture. Craftsmen of the Ming Dynasty used the succinct language of art to express their inner feelings and combined ingeniously the beauty of simplicity and quietness.

So the Ming furniture had simple structures, unique shapes and minimal decorations which would preserve the natural beauty of the wood. The joints were so accurately built that nails and glue were used only as accessories. Handles, lock plates, and hinges were attached in order to complement the lines of each piece.

After, the Tang dynasty (618-907 A.D.), tables with higher seats came into existence in the houses of the richer families.

Later, during the period of Qing dynasty (1644-1911), special emphasis was laid on a minute, ornamental details. Ancient Chinese Furniture History during Qing dynasty was more improvised that of the Ming dynasty. Such patterns existed from Emperor Yonzheng to Emperor Jiaxing.

Due of their peaceful reign, they could indulge in more luxurious and decorative furnishings, sumptuousness, and ornate designs, which were some of the basic features of Qing furniture, which was usually heavy, sizable and massive, and features exquisitely carved patterns.

Some pieces were carved from head to foot and had inlays of stone, mother-of-pearl, porcelain, metal, and enamel. Qing furniture’s curved decorations and exaggerated shapes demand attention. In the late Qing Dynasty, antique Chinese furniture waned.

Furniture of the Ming Dynasty was known for its simplicity with sparse lines and little decoration while furniture of the Qing Dynasty emphasizes detail and extravagance. Furniture from southern China during ancient times tended to be very elaborate whereas northern furniture was big, heavy and grand.

Traditional Chinese furniture craftsmanship had reached its zenith since the Ancient times, and it reached such a high level of aesthetic success that it could even claim a place in the history of world furniture.