Unlike other important races, the Chinese have always paid great attention to documenting. That is why most of their history is not a mystery and we can trace their origins and their workings back as far as what other people would say is beyond history. The art of warfare is mastery that Ancient Chinese Generals had made their own magic. They had intense weaponry skills at their disposal along with advancements that other races had not imagined till they brought to light on it.

Sun Tzu was an ancient Chinese general of nigh note who served as a Chinese general under King Helu of Wu in the period that is probably 544-496 BC. He was as all accounts of him say exceedingly charismatic and of a build greater than normal men. The main accomplishment of Sun Tzu, however, was not strong.

He was an exceptional strategist in the art of war and even wrote a script named The Art of War. This script is studied even today as a reminder of how ancient Chinese generals knew that art of war to the last alphabet. He was the main person in charge of more than 10,000 men in those days. This was in most cases unheard of.

After more than 15 battles that he had personally overseen he had retired and became a philosopher. It was during this period that he wrote his classic The Art of War which along with many other Chinese contemporary war edicts have now been taken to be classics after their subsequent translation. As a philosopher, Sun Tzu turned away from violence and devoted his life to writing.

Amongst the ancient Chinese Generals, Yue Fei is another name that cannot go without mention. He was a general under the Southern Song Dynasty. The most notable performance of his as a Chinese general of the Song Dynasty is when he and his men almost unimaginably thwarted an attack from the Northern state of the Jin Dynasty. 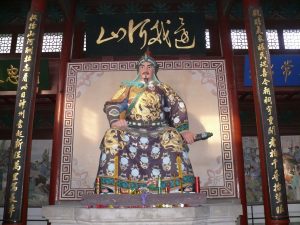 They were hugely outnumbered and still through sheer grit and Yue Feis military genius they were able to survive without many casualties. Legends say that they were able to use the topography of the region against the invaders and if they had not the dynasty would have been destroyed for sure as most of the army was away in battle elsewhere leaving the king unprotected.

He singlehandedly started a rebellion that would lead to the formation of the Ming Dynasty and give him the title of Taizu of Ming which literally means the Great ancestor of Ming.