The Chinese were great lovers of beauty as well as discipline and that is why they idolized beauty in almost anything. As it was the Chinese Girls who were most beautiful amongst them were given a status of worship in many cases. Other than this, girls in ancient China had a profound influence on the different aspects of Chinese arts such as pottery paintings and songs. 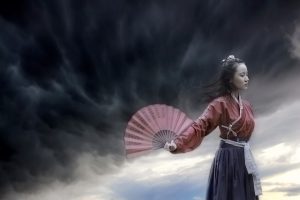 These have to some extent immortalized their beauty and thereby done justice to the influence they had on these artists in their lifetime. Conquests are not the only thing earns you a place in history as the Chinese culture gives the ode to all the beautiful qualities of man.

The other way of immortalizing the beauty of ancient Chinese girls happened to be singing of them in the local operas of those times. This has led to so many beautiful songs of their age being sung even today of the beauty of the girl who is the subject of that song. Other than this the Chinese art of dance was heavily based on the donning of extensive and decorative clothing which were often influenced by the clothing style of the most beautiful girls of that age. This has been carried on to this day in the form of the different houses of Chinese operas.

Four of the most beautiful ancient Chinese girls:

Here we have tried to present to you the four most revered and beautiful ancient Chinese girls. They were forever immortalized in beautiful artistry and the most provocative of songs. They are as follows:

She has been considered by many as one of the most beautiful girls of all the ancient Chinese girls. Yang Yuhuan was born to a peasant family but her beauty soon became a reason of talk and she was escorted to the emperor of her time and was married off to him as the highest royal concubine.

She was another beauty of that age whose beauty lives on through the words of songs and paintings.

Diao Chan was the daughter of a nobleman in the Tang Dynasty and was revered as the most beautiful girl of her age. So much so that she cause two powerful noblemen to fight over her.

Forever taken to be the most beautiful of the ancient Chinese girls of all time Xi Shi was truly a sight to behold according to the songs that were sung in her praise and the beautiful paintings in her honor pay ode to this.