The practice of Ancient Chinese Jewellery making in China began over 5,000 years ago, c. 2200 3300 BC. during the Yangtze Delta’s Middle Neolithic Yang-Shao and Lungshanoid cultures.

As Chinese jewelry design developed, elaborate design motifs were adopted which had specific religious significance, and were traditionally used in Buddhist ceremonies. 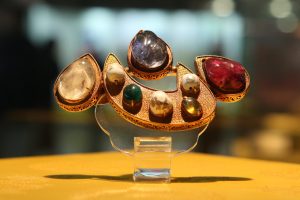 Men and women of Ancient China wore items of jewelry as symbols of their wealth and status. The most popular pieces included headdresses, necklaces, pectorals, temple and coin pendants, bracelets, rings, seal rings, head jewelry, anklets, and diadems. The most uncommon piece of Ancient Chinese Jewellery was the earring, which was worn by both men nor women. It was traditional for men to wear one earring and women to wear a pair of earrings. Amulets were common, often with a Chinese symbol or dragon design.

The Ancient Chinese used silver in their jewellery more than gold. Blue Kingfisher feathers were added to further enhance the jewellary in the early period and later, blue gems and glass were incorporated into designs. However, Jade was valued by the ancient Chinese more than any other gemstone.

Use of Jade in Ancient Chinese Jewelry:

Chinese Jade came from the most western point of China in today Xinjiang (Khotan, Yarkand). The Chinese revered jade because of the human-like qualities they assigned to it, such as its hardness, durability, and beauty. Jade symbolizes nobility, prosperity, perfection, and immortality and it is also believed that Jade possesses the power of luck.

Jade carving became a sophisticated art during the Shang dynasty (16001050 B.C.). The first jade pieces were very simple, but as time progressed, more complex designs evolved. Jade was carved with symbols to bring luck, prosperity and good fortune. Jade is considered protective and was often carved into solid rings.

Although carving jades is a very specialized skill that often requires years of training, simple cabochons can be made using commonly available lapidary grinders and polishes. A cabochon is an excellent way to show the color and texture of a particularly beautiful piece of jade. The dragon is a mythical beast symbolizing benevolence, intelligence, and goodwill.

Turtles are regarded as divine animals in Chinese culture and symbolize longevity. Such animals were carved in Jade. A tradition was adopted in China since the ancient times (which is still carried on) to give a gift of these carved jade jewellery as an expression of love. Other ancient chinese designs included various Buddhist symbols, scrolls, flowers, winged birds, dragons and the Phoenix.

A famous type of ancient jewellary making included Cloisonn, where bright colors of enamel are inlaid in a metal base and fired in a kiln. Cloisonn dates back to the 13th century Yuan dynasty. Cloisonne was a very famous jewellary form. Cloisonn centerpieces were made into pendants, earrings, rings, and bracelets.

The Chinese often placed their jewellery in their graves. Most Chinese graves found by archaeologists contain decorative jewellery. The ancient Chinese designs and ideas are used by people even today and are very popular in the traditional Chinese households.