This article gives information on the origins of the art of ancient Chinese Kung Fu and its history.

When most people think of the Chinese the first thing that comes to mind is probably the martial arts that they have spent over 400 years to develop. It is true that these martial arts have their origins back four millennia and are still practiced in China in their pristine form. 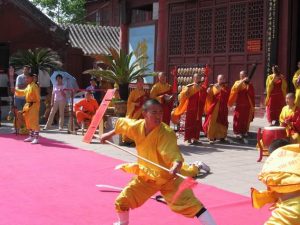 The Lethal techniques that were formed then were for self-defense in those days and even today there no less relevant and perhaps that is why they are still studies. Ancient Chinese Kung Fu is only one of the old Wu Shu or self-defense methods but is the most effective

The origins of ancient Chinese Kung Fu has its roots in legend as it dates back to the Yellow Emperor who on faced with severe threats in the 4000 BC period started a system of hand-to-hand fighting style that would then turn the tides of war in his direction. It was unmistakably successful and as a result, it was immediately passed down from generation to generation when written accounts of its effectiveness can be found.

At around 400 BCE there are written accounts of the hand-to-hand Chinese martial arts or wrestling with blows that are either hard or soft in nature. Together with this and the weaponry that was developed by then, the Chinese military was truly feared.

Ancient Chinese Kung Fu received new light in the face of a new type of training. This was the formation and institutionalization of Shaolin Kung Fu in the Buddhist monasteries of that time. The earliest account of this is in the scriptures dated 728 CE and their use in the marital affairs of that time.

These along with the use of the martial arts to protect the monasteries which were under the constant persecution of the kings made the Kung Fu style one of the most used forms in that period. In the later age of Chinese history scores of scripts can be found on the different techniques relating to the use of martial arts in those days.

The ancient Chinese Kung Fu has a very rigorous training technique and decorum if followed correctly. They are meant to train the inner and external aspects of the body with an entail of the spiritual growth of a person. The main aspects of the training are training the following:

The external training includes the training of the body itself. From the hand, the legs the different parts of the body that need to be fortified and the reaction speed that needs to be made faster. This is usually done by maintaining strict composure in the face of the attacker and predetermining the course of the attack.

This is mainly the attaining of the inner peace of an individual through long periods of communal meditation and strict discipline on the life. The major points of focus in this part are the training of the heart, the spirit, and the mind. This part of the training teaches the disciples not to attack but to defend.