Ancient Chinese women are known for their elaborate hairstyles, luscious lips, arched eyebrows and flawless skin (Ancient Chinese Make Up). Ancient Chinese make-up used by these women has become the basis of beauty treatment in many modern day spas and parlors. 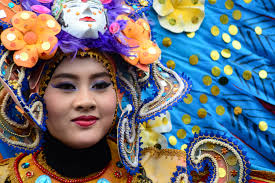 From Empress Dowager Cixi to the famous Yang Yuhuan, each had a distinctive approach towards makeup. Even the male counterparts took measures to ensure that the ladies wore the right kind of makeup.

Hairstyling, facial makeup, and eyebrow designs are the key areas ancient Chinese women concentrated on. In those days, a woman’s figure was not as important as her face. With loose long robes hiding the contours of her body, a Chinese woman ensured she had a good face with beautiful feet.

Steps and style of Ancient Chinese Make Up:

Ancient Chinese Make Up dates back to the Tang dynasty. A distinctive set of makeup steps had evolved by this period and women began applying makeup more frequently.

These women from the Tang dynasty applied makeup in seven steps.

-powdering of the face,

The practice of pasting floral designs on the forehead has a very interesting story behind it. It is believed that once, princess Shouyang was lying under a plum tree. This is when a plum blossom fell on her forehead and left its imprint on her forehead.

The court ladies, on seeing the imprint were so delighted that they too wanted such designs for themselves. Soon paper cuttings, foil cuttings, shells, and feathers began to be used.

The gilding of forehead was inspired by the statues of Buddha. This came about in the period when Buddhism became popular in China. Women used other to bring about the effect.

Hairstyling was one very important feature of Ancient Chinese Make Up. Women believed that height of hair signified stature and royalty. Women are known to have raised the height of their hair up to a meter. The diversity of their hairstyles is inspiring.

The ancient Chinese art of lip makeup is well known even today. What essentially began as a way of pleasing the Gods soon became a widespread practice. Vermillion mixed with mineral wax and animal fat was used to color the lips. Vermillion gave the lips that perfect red color while the wax helped make the effect last.

Ancient Chinese women are known to have paid extra care to their eyebrows. Traced eyebrows were a common sight. Penciling eyebrows became common in the Han dynasty. Women used charcoal twigs and ink to trace their eyebrow.

Women traced them in different shapes and styles. From long thin willow eyebrows to dense short olive shaped laurel-leaf eyebrows Chinese women are known to have tried it all.

Ancient Chinese Make Up has a long history. Makeup and women are inseparable, history stands as a witness of this statement.