Makeup enhances ones look and this was also believed by ancient Chinese by the abundant use of makeup during their times to look pretty. Ancient Chinese Makeup Stages was used mainly by the higher classes and use of makeup represented higher status in society. 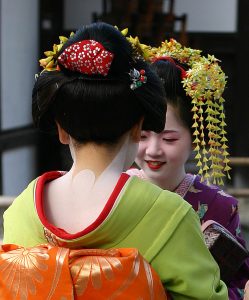 Ancient Chinese Makeup Stages was popularized mainly during the Tang Dynasty. The women would go through seven stages of decorating themselves with makeup. The women would use makeup boxes to store their various lip colors, mirrors and rouges.

1.Powder Base used in makeup

The first stage of makeup in ancient China was applying powder base. The face powder was made up of pearls and skin cream made of flower distillate. This was extensively used by Empress Dowager Cixi in ancient China. Her subjects also used a powder base but which was much cheaper in quality.

2.Applying color to the face

The ancient Chinese women used a jade face roller to add color to their face and smoothen it. The white powder was used to further color the face as white complexion was cherished in ancient China.

Ancient Chinese makeup consisted of coloring the dimples which are the attraction points on the face.

Rouge was used to decorate the cheeks and accentuate their otherwise flat cheekbones.

This was the seventh stage of makeup in ancient China. Lip color has a very flamboyant history in ancient China. It was around for over 5000 years and had a special status in ancient Chinese makeup. First, the lip color also known as lip balm or mouth balm was used primarily to provide relief to chapped lips. It was made from the crushed petal.

But as time wore on it was used to show color on one’s lips. In prehistoric times the lip color was obtained from animals, plants or certain minerals. In historic times, the raw material was vermilion but because of its feature of not being able to stick to lips, animal fat or mineral wax was added to it. The color, of course, was the best suited to lips.

There were also various patterns used on the lips which differed from dynasty to dynasty. The shapes of circles, hearts, and flowers were drawn on the lips with the color rouge. The fingernails were also painted by most women, the color representing the class to which they belonged. The colors were derived from gelatin, beeswax, gum, egg etc.

The delicate skin therapy was also used in those days. Ancient Chinese makeup also consisted of a special bath before dressing. The bath contained litchi, vitamin B &C, phosphorous and iron. This made the skin smooth and flawless.