The first image that comes to our mind while visualizing Chinese New Year is the giant dragon mask. Ancient Chinese Masks have always occupied ritualistic and religious significance in many of the ancient civilizations. So were they significant in ancient Chinese culture? They had a tradition of mask making. Chinese masks are indeed the embodiment of the life of an ancient human culture. 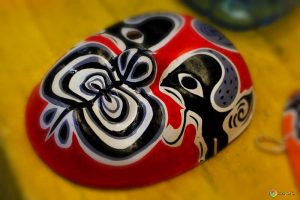 Belief in superstitions, fetishism, rituals, and customs is the mark of an ancient society. Belief in masks may also be associated with their conception of life and death. Ancient Chinese Masks often functioned as a messenger, of men’s wishes, desires, and prayers to the unknown power called god. Masks were also believed to bring blessings, expel evil powers and eliminate diseases. Possession of certain masks brought good luck and fortune, they believed.

It was during the Shang and Zhou dynasties that masks made their first appearance in Chinese culture. Images of people wearing masks have been found in rock paintings along the Yangtze River. Masks are also associated with Buddhism. They were extremely important in Chinese Shamanist rituals. In shamanic rituals, Shindong dance masks were used to thank the gods.

The dragon mask symbolizes good luck during the Chinese New year. As the New Year marks the beginning of planting season in China, it is believed that the mask represents good rain and favorable conditions. Dragon masks, brightly colored are used in parades. They are either carried in arms or worn by the dancer. They may have a yawning jaw or a large mouth.

Apart from that, masks are made use during the Chinese opera and dance performances where the faces of actors are painted like those of the masks. Each actor wears a mask suitable to his character in the play. This led to Beijing opera characterized by attractive facial patterns. Swallowing animal masks symbolized the swallowing of disasters.

Masks may also be further classified. The Dancers masks are used at sacrificial ceremonies to dispel ghosts and avail blessings of God. Masks worn during festive occasions are also popular. Their purpose is to pray for long life, rich harvests and protection from evil. Masks are sometimes used during the birth of a newborn baby. Some other masks are kept at homes to scare away evil spirits.

Though generally made of wood, masks are also made of metals, cloth, stones, grass and even paper. They are painted in numerous colors depicting the faces of ghosts, demons, celestial animals and so on.

Ancient Chinese Masks have not disappeared today. Rather, they are being worn by people during important festivals and religious rituals. Although the rituals associated with these masks do not exist as they did earlier, masks continue to influence the lives of the Chinese people even today. They also serve as means of interior decoration in many of the modern homes all over the world.

The Chinese were familiar with numerals long before Asians were. It is assumed that Calculation first began by using the fingers. Information on Chinese number system is collected from inscriptions. These records contain the number of men lost and prisoners taken in wars, animals hunted etc. They also contain information on days and months.

It was by about 1500 BC in the Shang dynasty that the Chinese people began using written numbers. Chinese number system was a base-10 system while the West Asian system used base 60. This was an important difference by which the Chinese system was more efficient and easy. They did not have irrational numbers.

The Chinese by 450 BC itself, Zu Chongzhi was able to draw the connection between Pie and the seven decimal places. Around 190 AD, i.e., in the Han dynasty, the Chinese began to use an abacus.