Ancient Chinese mythology dates back to 12th century B.C. when it existed in oral form. The first written collection of myths appeared during the Wei and Jin Dynasties in the 3rd century A.D. The myths are influenced by long-standing superstitions and beliefs from the Chinese schools of thoughts mainly Taoism, Confucianism, and Buddhism. 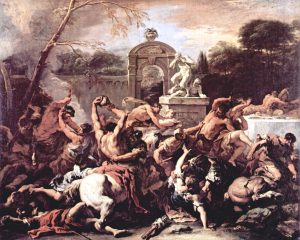 These myths are weaved around some main characters which are either ghosts or gods or foxes. The myths or stories encourage good deeds as opposed to bad deeds, talk up about rebellion as opposed to oppression and mainly show the various aspects of human nature. Here Gods, Ghosts, fairies, and foxes are shown to be very human so that one can completely identify with them.

Some of the Ancient Chinese legends are depicted below

Ancient Chinese legend of Pangu and the Creation of the World

This legend is attributed to Ko Hung, Taoist writer of 4th century A.D. The myth goes something like this. At first, Pangu was inside an egg that was formed within the darkness and chaos which was the beginning of this universe.

As Pangu grew in size inside the egg, it finally cracked and one part of it floated on top to form the heaven and the heavier part fell down to form earth. But Pangu feared that the earth and heaven would meet again so he held the heavens while standing on earth and kept on growing till there was huge space between the Heavens and the Earth.

After Pangus death, his body part formed the world and all its elements. Even today he is held responsible for the weather.

This is one of the Ancient Chinese legends, written in the Analects of Confucius by Zengzi who was a student of Confucius school of thought and lived in the 6th century B.C.

The legend is that Zenzis son was insisting on accompanying his mother to the market. The mother consoled her kid by saying that they would kill a pig if he stayed back but after she returned. The kid agreed to his mother’s words and was an obedient kid at home.

After the mother returned Zengzi went to get the knife to kill the pig when the mother stopped him by saying she was just trying to find an excuse and there’s no need to actually kill the pig.

At this, Zengzi replied that it’s very important that parents keep their words as given to their child so that they do not learn from this age itself how to cheat people. Zengzi then killed the pig saying that parents are no less than leaders who have to live by example.

In ancient Chinese Mythology, Diyu refers to hell. This legend has been influenced by principles of Buddhism. The legend says that the Diyu is divided into ten courts where king Yama was put in charge by the Jade Emperor.

All will be finally reborn but after going through various categories of hell. The types of hell that an individual would be tortured it would depend upon their good or bad deeds.