Chinese and fascination for numbers are inseparable. They were the pioneers in numbering, so much so that a Singapore researcher claims that Chinese were the first to invent numbers. All other number systems evolved from the ancient Chinese numbering system. 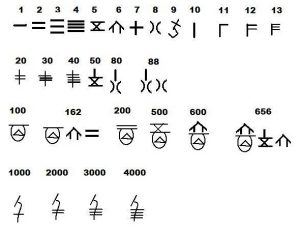 Early Chinese numbering system comprised of symbols. These symbols were inscribed on bones of animals. Later counting boards began to be used. Tiny sticks of bamboo or ivory were used to represent the numbers. Place value system originated here. When placed in the rightmost column the stick represented one, in the next column on the left, it represented ten and so on.

They represented zero as blank. Ancient Chinese scripture contains detailed description on how to work with numbers. The invention of the abacus is also credited to the ancient Chinese numbering system.

Fascination with numbers in ancient China:

An example of one such square is the Lo Shung Square. It is an order three square where each row, column and diagonal adds up to 15. It was Yu the Great who discovered this square on the back of a turtle.

Researchers believe that ancient Chinese men carried a rod bundles which were whipped out and used like calculators. Calculations were done by placing these rods on the ground or on boards. Merchants, scholars, and monks commonly used them.

Addition and subtraction could be easily performed by using the rods. Soon ancient Chinese numbering champions found ways to multiply and divide numbers. Xiahou Yangs mathematical notes said that to multiply numbers by 10, 100, 1000 and so on, one simply needs to move the rods left by 1,2,3 positions respectively.

Similarly, for the division, the rods had to be moved right by 1, 2, 3 positions. These concepts are useful even today. Binary calculations in computers make use of this same technique.

With the growing influence of Chinese empire, need for competent numbering and calculations arose. A textbook named Nine Chapters of Mathematical Art became an important tool for education.

This book contained important concepts trade, engineering, and payment of wages. This book proved to be an important guide to solve equations.

Some great mathematicians from ancient China:

Liu Hui: He is known to give exact square root of numbers, and developed early concepts of integral and differential calculus.

Sun Tzu: Considered one of the jewels of mathematics, Sin Tzu gave techniques that were used to measure planetary movements.

Qin Jiushao: This brilliant Chinese mathematician is known to have solved a quadratic equation and those involving cube roots.

Ancient Chinese numbering system was clearly the precursor of the number system that we use today. Even the abacus has its origins tracked down to the China. The rich Chinese heritage is filled with tales of achievement and inspires future inventions.