Ancient Chinese porcelain can be traced back to the Tang dynasty when minerals were refined to make earthenware. The hard paste porcelain was a combination of China clay called kaolin and China stone is known as feldspar. According to early Chinese potters, the ingredients used were classified under the body and bone of porcelain. According to historians who have dug up the origins of porcelain making in China, the first plant came up in the Jiangxi province. 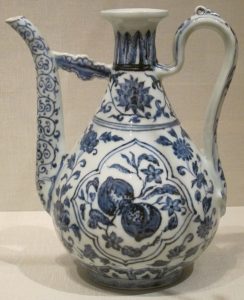 In a place called Jingdezhen, there was an ancient Chinese porcelain making hub where more than a million people worked in 3000 kilns for making ceramics. The primary aim of the factory was to make decorations and designs as well as glazes for making natural colors like peach bloom, oxblood, apple green and a pale shade of gray-blue. The colors were inspired by a sunny sky reflecting the coming of spring.

Decoration on rice grains was done by chipping off the decoration before glazing. The cutout portions were filled with glaze to enable them to remain transparent prior to the firing process. For rice decorations, black, green, soft pink and rose were the predominant colors. Ancient Chinese porcelain created during the Ming dynasty was characterized by boldness in form and a wide array of designs as well.

Shang dynasty in 16 BC

There were the huge and gigantic vessels for the imperial Chinese temples, the blue and white and the light eggshell like porcelain. In the Fujian province of China, fine white porcelain was made which drew a great amount of interest among European potters from the 15th to the 18th century. They brought it over to Europe and renamed it Blanc de Chine.

The real origin of ancient Chinese porcelain can be traced back to 16 BC during the reign of the Shang dynasty. The techniques for firing were coarse in the bodies as well the glazes and were done under very low temperature. Ancient Chinese potters learned from firing white pottery and hard stamped pottery in a celadon.

The primitive Chinese porcelain was very easy to rinse but was also very elegantly decorated. It had to be handled with care. In ancient China, the method of firing and production standards was improved down the ages enabling it to replace pottery. Finally, pottery was replaced and the vessels created became objects of daily use in course of time in ancient China.