The early shi came from the ancient warrior caste, but the make-up of the ship gradually evolved until it was mostly made of aristocratic scholars who studied in order to occupy positions of rank, and then further into a bureaucratic scholarly elite where noble lineage was de-emphasized. 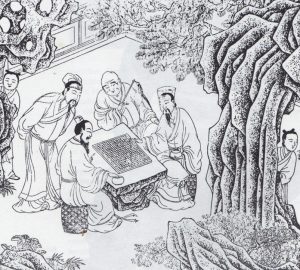 Scholars even those who owned land were never very rich, but they were respected because of their knowledge. Access to information was very limited in ancient times, and so scholarly pursuits were very challenging.

The Four Arts of the Chinese Scholar, otherwise known as Siyi, is a term used to describe four main accomplishments required of the Chinese scholar gentleman. They are Qin, qi, Shu (calligraphy) and Hua (painting).

However to create a piece of wonderful works with four treasures is a hard job, which needs the learners worked hard for a long time, especially to be the good writing man of calligraphy, at least 10 years are needed. Four treasures in a study are significant, the development of Chinese literature, painting, calligraphy and custom, even the succession of Chinese characters are both done partially via them.

Chinese scholars or learners were much too dainty about their study and especially emphasized on their tools for creation. In a traditional scholars study, the visitors can usually see these things: Writing Brush, Ink-Stick, Ink-stone, Chinese paper, other than the large bookshelf and their large number of stored books.

In general, their studies are decorated well in accordance with their original blueprint. Traditional scholars used to be the reclusive men due to their non-satisfaction with the real society. They were willing to stay in their ideal world, which cannot be found in the real world.

Scholars are high-hearted, so the common people cannot easily come into their studies except their relatives and bosom friends and here is their own world to show their own personality. The scholars were closely connected with arts of China such as calligraphy, painting, and seal carving.

These are a few facts that help recognize the ancient Chinese scholars.