Ancient Chinese shoes were made from tanned animal hide which became part of the diverse customs and styles followed by the people. In traditional China, shoes have been singled out and not clubbed under apparel. Footwear continued to be an integral part of Chinese fashion and culture. Shoes and socks were distinguished as foot clothing which was different from upper and lower clothing. 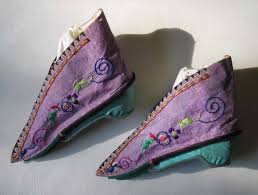 In ancient China, there was very little distinction between shoes and socks. The feet were protected by wrapping pieces of animal hide tied with leather thongs. This system of protecting the feet can be traced back to the Stone Age.

The earliest pair of shoes found in China dates back 4000 years after excavations in the Xinjiang region revealed a female mummified corpse wearing them.

From ancient Chinese scripts, it was found that an entire animal hide was trimmed and stretched out. They were regarded as the predecessors of present-day leather boots. There were other materials like yak hide which was used as well in the plains of Tibet.

The people of Orogen used deer hides and the people of Hezhen relied on a fish skin for footwear. Leather boots came into fashion during the time of King Wuling of Zhao in 325 BC.

Ancient Chinese shoes were also made of straw in the southern and eastern part of China. Bamboo needles and flax thread was used to fix them and the shoemaking system was prevalent 7000 years ago according to archaeological finds. Leaving aside nomadic tribes, everyone else in China wore thick straw shoes, especially in the freezing northern parts and sandals were prevalent in the hot humid southern parts of the country.

Ancient Chinese shoes also consisted of wooden sandals made by attaching straw ropes to wooden soles. There were silk embroidered shoes as well as silk breeding began 3000 years ago in China during the time of the Shang dynasty. Silk was woven and colored with dyes made from mineral and plants as they slowly replaced straw shoes.

High heel shoes up to 15 centimeters were first worn by women in China during the early 18th century. The shoes made of silk and with flower, bird or fruit embroidery, looked great. They were worn by upper-class women and the heels made them sway fashionably. It helped them to tower over others when they walked.