Ancient Chinese vessels were used as early as 2 AD and were known as junks. It has been chronicled by historians of Chinese shipping that the first junk was in operation at the time of the Han dynasty which existed from 206 to 220 AD. They were sailboats used for voyages across Asia during the reign of the Chinese emperors. A lot of creativity went into developing the castle ships and huge dragon boats as they were known in the Sui and Ming dynasties. 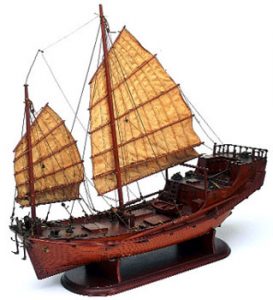 The emperor Zhen He was known to have large treasure boats for voyages to the western seas at the time of the Ming dynasty from 1368 to 1644. But it was the castle ship that was vintage Chinese in nature and was more than 33 meters in length with every floor of the ship having a unique name of its own. It was like a series of several storied houses with the first floor being called Lu, the second, Fei Lu and the top floor was the sparrow room, known as the Que Shi.

These were not ordinary ships as all ancient Chinese vessels were used for defense and assault. The castle ships, true to their name, were like fortresses in water with a huge body heavily guarded with spears and daggers and they maintained liaison with other warships with the help of command posts during the time of the Han dynasty. The deck was so large that horses and chariots could be accommodated surrounded by large galleries.

For sailing to Yangzhou which at present is the Jiangsu province in eastern China, the dragon boat was used by Emperor Sui Yang who belonged to the Sui dynasty. It resembled a palace on the sea with a top floor and two middle rooms decked with jade and gold. The main dragon boat was guarded by nine three storied similar boats on high seas.

For oceangoing purposes, the ancient Chinese vessels were unique in those days. During the time if Zhen He, it was called a treasure ship and resembled a present-day multi-storied building. With a broad deck and a sharp bow, the ship could easily maneuver the waves and rides on them were comfortable as well. The treasure boat was the most advanced and largest wooden sailing boats of the time and was used by emperors to navigate the South China Sea and the western sea as well.