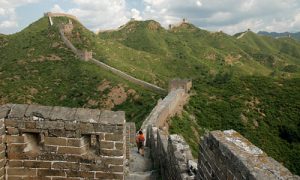 The very first set of walls which was designed was done so in order to keep the Mongol nomads away from China. It was built using earth and also stones and the frames were made of wood. This was built up during the Qin Dynasty. There were various modifications which are made to the walls in the next millennium but then the construction of these modern walls had begun during the Ming Dynasty which was in 1388 to 1644 CE.

The modifications made in the ancient Chinese walls during the Ming dynasty were quite vast. The walls were around 25 feet in height, 15 to around 30 feet around at base and 9 to 12 feet wide on the top. There were also guard stations and watchtowers which were made at regular intervals.

The ancient Chinese wall was made discontinuous and because of this the Mongols could breach them by simply going around it hence this didn’t prove to be very successful and in the end, it had been abandoned. Because of the western contact which was there with China from the 17th Century until the 20th Century, this legend of the ancient Chinese wall had grown along with its tourism too. The restoration, as well as rebuildings, had taken place in the 20th century and in the year 1987, this wall was named as the world heritage site. If you look at the great wall today you will find that a portion which runs for around 50 miles and is in Beijing gets almost thousands and thousands of tourists per day.

There are also various urban legends stated which never really disappear. A legend is present which really claims that the only manmade object which can be seen from the moon is this ancient Chinese wall. But then this isn’t really true. NASA says that within the orbit of the earth the objects can be visible but then once you leave the orbit then seeing it is next to impossible.