For the Ancient Chinese Burials, they believed when a person dies, they would be reincarnated into either human again, or animals such as dogs and pigs, depending on how well they had behaved when they were alive. For instance, the good was believed to be reborn as human beings into rich and prominent families, while the evil was either reborn as humans who led lives full of hardships or as animals. 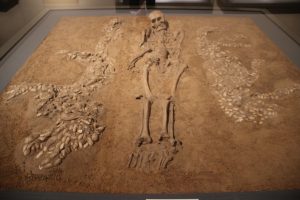 Thus, the people made many preparations for their next lives by doing as much good to others as they could and also worshipped their ancestors to seek their advice through priests, diviners, and objects such as oracle bones. The dead were buried together with their possessions such as jewelry and clothes, which were believed to follow them in their next life. For the dead emperors of ancient China, even the queens and concubines were sacrificed and buried along with the emperors to accompany them to the next life.

While Ancient Chinese Burials customs were more subject to local variation than funeral rites as such, throughout China there was a preference for burial over alternative means of dealing with the corpse. For example, few Chinese opted for Buddhism’s custom of cremation, despite the otherwise strong influence this religion had on Chinese ideas and practices related to life and death.

Unlike Indians, for whom the body could be seen as a temporary vehicle for one’s eternal spirit, Chinese typically saw the body as a valued gift from the ancestors that one should place wholly under the soil near one’s ancestral village.

In modern China, especially under the Communist Party since 1949, Chinese have turned to cremation more often. But this has been for practical reasons related to land use and to the party’s campaign against “superstitious” behavior and in favor of frugality in performing rituals.

Traditionally, the corpse, or at least the bones, represented powers that lasted beyond death and could affect the fate of living relatives. For this reason, the use of an expert in feng-shui (Chinese geomancy) was needed to determine the time, place, and orientation of the burial of a corpse.

This usage was in line with the aforementioned belief that the poor, which lingered at the grave, was more physical in character than the hun soul(s). Its importance is underlined by the fact that the practice is being revived in China after years of condemnation by Communist officials.

Among these observances were very complex mourning customs. They were governed by the general principle that the closeness of one’s relationship to the deceased determined the degree of mourning one must observe (symbolized by the coarseness of one’s clothes and the length of the mourning period, for example).

In addition to observing mourning customs, relatives of the deceased were obliged to care for his or her soul(s) at the home altar and at the clan ancestral hall, if one existed. At the home altar, the family remembered a recently deceased relative through highly personalized offerings of favorite foods and other items.

They remembered more distant relatives as a group of generic ancestral rites, such as those which occurred prior to family feasts at the New Year, mid-Autumn, and other festivals. Indeed, one of the most significant symbolic reminders that ancestors were still part of the family was their inclusion as honored guests at holiday meals.