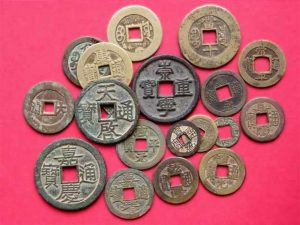 China led the ancient world by introducing shells as a medium of exchange and unit of account in commerce towards the end of the Neolithic Age. Shells, being durable and easy to carry and count, were used as the universal equivalent. Spade-shaped and knife-shaped coins were also popular in northern China. The influence of shell did not fade though it staged out as a currency with the social and economic development.

Around 378 BC, Emperor Qin Shi Huang unified all the currencies circulated and laid the pattern of the Chinese coins in the subsequential dynasties. The two legal currencies were gold and bronze coins which were round in shape with a square hole in the center.

The bronze coin originated from those used by the Qin State in previous dynasties and was named Ban Liang Qian (half Liang money) which forbade private mintage and centralized the mintage right to the state. In 119 BC, the Ban Liang was replaced by the San Zhu, and then the Wu Zhu coin which was used for a long time with some modifications from time to time.

In 621, Kai Yuan Tong Bao (or Kai Tong Yuan Bao) was introduced by the Emperor Gao Zu during the Tang dynasty and used for successive 300 years. It was claimed to be the most successful money in Chinese history since it was used not only throughout the Tang Dynasty in China but also by many countries that had the close commercial tie with the Tang Dynasty.

This money had two features from its predecessors. Firstly, the coin was no longer named according to its weight. Secondly, the writer of the characters on the coin was recorded in history books for the first time. Kai Yuan Tong Bao was written by Ouyang Xun, the top among the four calligraphy masters in the Tang Dynasty.

The outflow of the Chinese Coins caused money shortage in China which in turn led Emperor Wu Zong of Tang Dynasty and Emperor Shi Zong of Later Zhou to order melting the Buddha statues for mintage. So during the reign of Emperor Xian Zong (806-820), the government practiced the earliest transfer method, Fei Qian, namely flying money.

During Song Dynasty (960-1279), Song Chinese Coins were introduced, used over much of Asia, especially in Korea, Japan, and Indonesia. As the output of the coins declined, the first paper currency, Jiao Zi was introduced due to several reasons. Firstly, after a great development of the economy and a boom in trade registered in the Northern Song Dynasty, the iron coin sometimes showed its disadvantages. In addition, during this period, printing showed great results, it was able to produce paper money.