In ancient China, people used to live in caves and had no clothes whatsoever. It was the new Stone Age when the Chinese people invented a needle made of bone. They began to sew winter clothes made of leaves and animal skins. Later on, they began to spin and weave coats made with linen.

Soon dress became a token of social status. In the Zhou dynasty, the system was perfect. There were rules about color, design, and adornment of clothes. These rules were made by the emperor and the officials. The color yellow was for the emperor only. Green, red, white, and black were symbols for north, south, east, and west. 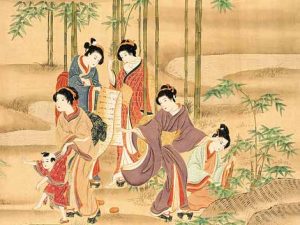 Clothing was a show of class in ancient China. The fabric, color, and decorations on their clothing told about the wearer’s position in society. People of higher class dressed in the finest of silk. Wealthy men and women wore long robes tied with a sash. Underneath they wore trousers that were tight at the ankles.

They wore heavy silk in winter and light silk in summer. The silk was dyed in many beautiful colors. Men tied their hair in a knot covered with a cloth or hat. Women wore their hair braided and twisted and decorated with pins and combs. Peasants wore a long garment like a shirt made of hemp fiber. They always wore hats in public.

During the Sui and Tang dynasties, the economy was good and people lived quiet lives. People of many countries came to have a cultural exchange. In middle Asia, people were greatly influenced by the new Chinese dress system.

There were many beautiful designs on the silk they used in Ancient Chinese Costumes Clothes. Before the Chang and Zhou dynasties, the beautiful patterns were abstract. After the Zhou dynasty, there were symmetric designs were in fashion. During the Ming and Qing dynasties, they used the designs and patterns of flowers, animals, mountains, rivers, lakes, and ponds.

Silk is made from silkworm cocoons. People unwind millions of cocoons to make clothes. It takes hundreds of them to make one blouse. It is hard work just to make the clothes. Today they have machines to do that work for us.
Many things in ancient China were made of silk. Silk weaving and embroidery have been two of China’s contributions to the world. Most silk items are expensive. Silk products are divided into many types. There is satin and brocade.