As the emblem of the Emperor and the Imperial command, the legend of the Ancient Chinese Dragons permeates the ancient Chinese civilization and shaped their culture until today. Its benevolence signifies greatness, goodness, and blessings.

Ancient Chinese Dragons, or Lung, symbolizes power and excellence, valiancy and boldness, heroism and perseverance, nobility and divinity. A dragon overcomes obstacles until success is his. He is energetic, decisive, optimistic, intelligent and ambitious. 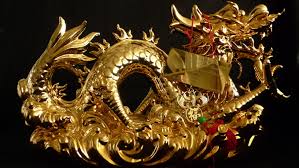 Unlike the negative energies associated with Western Dragons, most Eastern Dragons are beautiful, friendly, and wise. They are the angels of the Orient. Instead of being hated, they are loved and worshipped. Temples and shrines have been built to honor them, for they control the rain, rivers, lakes, and seas. Many Chinese cities have pagodas where people used to burn incense and pray to dragons.

The Black Dragon Pool Chapel, near Peking, was reserved for the Empress and her court.
Special worship services took place there on the first and fifteenth of every month. Dragon shrines and altars can still be seen in many parts of the Far East. They are usually along seashores and riverbanks because most Eastern Dragons live in water.

The Year of the Dragon, which takes place ever twelve years, is lucky. Present-day Oriental astrologers claim that children born during Dragon Years enjoy health, wealth, and long life.

Dragons are so wise that they have been royal advisors. A thirteenth-century Cambodian king spent his nights in a golden tower, where he consulted with the real ruler of the land a nine-headed dragon.

Eastern Dragons are vain, even though they are wise. They are insulted when a ruler doesn’t follow their advice, or when people do not honor their importance. Then, by thrashing about, dragons either stop making rain and cause water shortages, or they breathe black clouds that bring storms and floods.

Small dragons do minor mischief, such as making roofs leak or causing the rice to be sticky. People set off firecrackers and carry immense paper dragons in special parades. They also race dragon-shaped boats in water all to please and appease their dragons.

The Dragon brings upon the essence of life, in the form of its celestial breath, known to many as sheng chi. He yields life and bestows its power in the form of the seasons, bringing water from rain, warmth from the sunshine, wind from the seas and soil from the Earth.

The Dragon is the ultimate representation of the forces of Mother Nature, the greatest divine force on Earth. The Chinese Dragon is often seen as the symbol of divine protection and vigilance. It is regarded as the Supreme Being amongst all creatures. It has the ability to live in the seas, fly up the heavens and coiled up in the land in the form of mountains.

Being the divine mythical animal, the Dragon can ward off wandering evil spirits, protect the innocent and bestow safety to all that hold his emblem. The Chinese Dragon is looking upon as the ultimate symbol of Good Fortune.