Many of the modern games originated in China thousands of years ago. Back then, noble Chinese ladies and gentlemen played games and had various kinds of Ancient Chinese Entertainment. Hunting, Polo, and a type of football were just some of the more active games. One Chinese game called Liu Po was played long ago.

Although the rules of this game were lost to modern times, it is known that it consisted of 6 game pieces, which the player moved around on a board. Other games such as Parcheesi, Chess, and Backgammon are still played today. Poor people enjoyed storytelling and gambling. The Chinese played card games, board games, and chess.

Musical instruments were mainly popular in rich class. They also enjoyed dance and dramas. The farmers and working class were too busy working in the fields and in the evening they gathered around a fire to enjoy their opium tea and gossiped.

A poor family might have a songbird or a cricket in a cage. Juggling was a common form of Ancient Chinese Entertainment. People who could afford it loved to attend theatre and magic shows. They enjoyed watching acrobatics and martial arts displays. Dancing and musical instruments were popular. 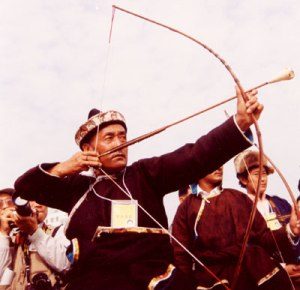 Chinese nobility played cards, chess, and board and table games. Hunting was also popular among all classes as sports and also to gather food. Swordsmanship gave a chance for the martial races to hone their skills. Archery and rowing were also important sports. Some Chinese scholars have argued that golf and snooker also originated in China, but this theory has not found much credence among scholars outside China.

A favorite Chinese puzzle is the Tangram. A Tangram is a square cut into seven different shapes. A person tries to put the seven pieces together to remake the square. The seven pieces are also used to create other shapes such as animals. Badminton was played and actually originated in China. Both children and adults in ancient China liked to play a game similar to our modern-day Frisbee toss.
Cricket fighting has a long history in China which can date back to the Tang dynasty (618 907A.D.). During the Song dynasty (960 1279A.D.), it became a popular form of entertainment. Later, it continued to flourish in Ming and Qing Dynasties (1616-1911).

In order to win, ancient Chinese would feed their crickets with controlled diets to keep them in fighting shape. There were even books taught how to find better crickets, how to diagnose various diseases of crickets.

Yard grass stalks were used to stimulate the crickets to fight. Generally speaking, the whole battle would last only a few minutes. However, for some powerful ones, the fighting would last about half an hour.

The origin and development of China’s sports activities seem to have been closely related to the production, work, war and entertainment of the time and Physical activity meant individual freedom of expression, which was contrary to the ancient teachings. People practiced Con Fu gymnastics to keep the body in good organic condition and ward off certain diseases caused by inactivity.