The ancient Chinese people had very distinctive social classes. Each of these has specific styles  (Ancient Chinese Fashion) and significance of dressing. Varied symbols are used on the clothing to distinguish between various strata of society.

The Ancient China Clothing has varied greatly throughout different periods of time. Each social or historical period brought about a new style. 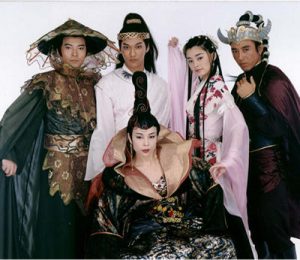 During the Pre-Qing Dynasty (also known as the Manchu Dynasty was the last ruling dynasty of China from 1644 to 1912.); the prevalent ancient Chinese clothing was broadly referred to as Hanfu with many variations such as traditional Chinese academic dress. Every individual stratum displayed a different Ancient Chinese Fashion. In fact, the military was totally distinctive in its appearance.

Chinese civil or military officials had an assortment of motifs to depict their rank and position. Hat knobs were used as an icon of their rank. There were nine types of color-coded hat knobs that represented the nine distinctive ranks. Another popular insignia was the Mandarin square or rank badge.

Clothing in Ancient China known as the Hanfu (also referred to as guzheng meaning “ancient clothing”), was the traditional dress of the Han Chinese folk. The term Hanfu has its organ in the Book of Han, which says, “then many came to the Court to pay homage and were delighted at the clothing style of the Han [Chinese].”
It was fascinating for these visitors to see the characteristic outfit – like a kimono and sandals made out of rice reed. As you can see, the Hanfu has a colorful history dating back 3000 years and more.

In fact, the dress was even worn by the legendary Yellow Emperor. It was popular since long before the Qing Dynasty came to power in the mid-seventeenth century. Since the material of this ancient Chinese clothing was always silk, supposedly discovered by the Yellow Emperor’s consort, Leizu, the Hanfu was also called ‘silk robes’.

The Hanfu now is worn only at special occasions which are a mostly historical reenactment, hobby, coming of age/rite of passage ceremonies, ceremonial clothing worn by religious priests, or cultural exercise. However, there are attempts on to try and make it a part of more day to day wear or at least during Chinese celebrations and festivals especially in China as well as among the nonresident community.

The Ancient Chinese clothing in its most traditional best can be explained as different parts of specific cloth that are draped in a special style. It would be totally different from the traditional garment of other ethnic groups in China like the Manchurian qipao.

There is a great difference between the Han way of dressing and the Manchurian influence. It is as yet an unsolved problem which of the two would be the correct traditional costume of the ancient Chinese. Some costumes commonly thought of as typically Chinese, such as the qipao, are the result of influence by brutal laws (Queue Order) imposed by Manchurian rulers of the Qing Dynasty, and are regarded by some advocates as not being “traditionally” Han.

The three main types of traditional Chinese clothing were the Pien-fu, the Ch’ang-P’ao, and the Shen-i. The Pien-fu is an ancient two-piece ceremonial costume of a tunic like top extending to the knees and a skirt or trousers that go down to the ankles.

In the Ch’ing Dynasty people of only certain status and rank could wear certain colors. The emperor wore yellow and members of the imperial family wore various shades of yellow. Other nobles wore blue. Those of lesser rank wore black. White was used only for mourning. Red was not used as much because it had been the most used color in the last dynasty.