Women with small feet were considered the ultimate in sex appeal and eligibility for a good marriage depended solely on this criteria in those days. Chinese families, depending on how affluent they were, bound the feet of their girl children between the ages of three to seven years. Those who were less well-off stalled this for as long as they could so that their daughter could be useful longer around the house and the fields. Once her feet were bound, she would not be able to move out at all. 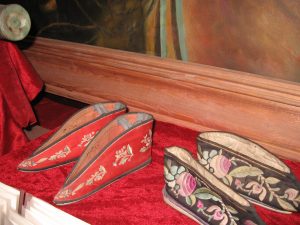 Presumably, this was also one of the reasons that Ancient Chinese Foot Binding became so popular, it insured that the woman would remain mainly confined to the home and depend solely on her husband also ensuring that this way she would remain chaste.

To give an extremely graphic account, the feet had to first be washed and massaged, after which, all except the first toe were broken and tied tightly under the foot. Then the arches were broken and the feet were bound tightly in extreme concavity with a long cloth bandage.

Every day the bandage had to be removed, the feet were washed and massaged, toenails were cut so that they would not cut into the instep and cause infections and then the bandage had to be bound back tightly again. In order to avoid severe infections like gangrene from setting in due to complete lack of blood supply and also to ease the pain, the feet were given hot and cold baths and regular attention.

Gradually, extra flesh would rot and fall off due to lack of circulation and blood supply and the feet became narrower and shorter. The feet were put into smaller and smaller shoes and the bandages were bound tighter every day till they achieved the perfect size of three to four inches to fit into Lotus shoes.

The process was not only excruciatingly painful for the little girl when the feet were actually broken and bound but it was also very tedious for the family to care for her during the next two or three years. Not only that, during this period, the girl would be quite useless since even trying to put weight on her feet would mean excruciating pain.

At the end of this period, the girl would have a badly contorted pair of feet which were considered the epitome of femininity and the only criterion for getting a good husband. The higher the social status of the family, the more important was this criterion.

The practice of Ancient Chinese Foot Binding started in the tenth century and lasted for approximately one thousand years until the Manchu Dynasty was toppled in 1911 and the New Republic banned foot binding. During this period, approximately one billion women had their feet bound.

The obvious question that arises is, how did this practice begin? There seems to be no conclusive evidence to it but there are various legends associated with foot binding. Some say that there was a Chinese princess called Yao Niang who walked so gracefully that it seemed as if she “skimmed over the top of golden lilies. And since small feet are associated with daintiness, the Chinese became so excessively obsessed with the concept that they started this self-inflicted torture.

Another legend says that Yao Niang was ordered to bind her feet so that her feet would look like new moons. Yet another one says that women bound their feet out of sympathy for an Empress who had clubbed feet.

Women with bound feet could barely totter, as they had to walk with all their weight on their heels. Apart from having severely mangled feet, Ancient Chinese Foot Binding is said to cause many other disabilities.