The sun rises in the east this fact if taken figuratively might be very well suited to describe the ancient civilization of China. An empire which came to be known as such was one of the cradles of civilization. Ancient Chinese art and science were much ahead of what was later taken into consideration by the western world. From languages to military might, China has been the pioneer of most of the revolutionary arts and sciences and one of such inventions is the invention of Ancient Chinese Gunpowder. Gunpowder is a Chinese invention and is amongst the 4 most important inventions of historical significance by China.

The Invention of Ancient Chinese Gunpowder:

The Chinese were always an experimenting civilization. From chemicals to language, ancient China has had experimented with everything and even now, the Chinese are pretty proud of their indigenous technology. One would be surprised to know that the invention of gunpowder was purely by accident rather than an experimental one. 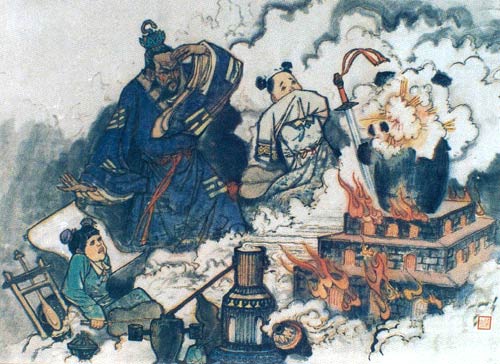 Ancient China gunpowder did actualize from various experiments, but the experiments were actually to find a mixture that would provide them with immortality.

A man has always wanted to attend immortality and the Chinese were no different. Wanting to attain the same, they used their superior knowledge of chemicals and related minerals and kept on developing a variety of mixtures and compounds.

Gunpowder in ancient China has invented accidentally when they mixed high levels of nitrate in the mixture, close to around 40%. But increment in the levels to nitrate in the mixture was done still later. The close of the 12th century saw the Chinese perfecting the art of making gunpowder. But the true credit should go to the Song Dynasty for actualizing the explosive mixture.

As it is said, all great inventions and discoveries are a result of some accident and the discovery of the explosive power of the gunpowder was literally due to an accident at a gunpowder store which caught fire and exploded violently.

The stock of the mixture was so much and the explosion so powerful that around 100 guards were blown to pieces including the wooden pillars and roof of the store! That was when the true nature of the gunpowder was realized and thus it was introduced in warfare.

Due to its explosive nature, it was not used for lighting up fires but in warfare further experiments proved increased nitrate levels in the mixture (up to 91%) made the best quality. Chinese warriors then gradually built up their ammunition arsenal with the expansive use of the same.