The first of flying machines kites bring a smile on everyone’s faces. Flying Ancient Chinese Kites is a hobby popular almost all over the globe. Tournaments and displays are organized for the same at frequent intervals. China is the birthplace of the worlds first flying machine and takes pride in designing and exporting unique kites all over the world.

The first kites to take flight in China have invented around 2300 years ago during the Warring Empires time. History states this invention to have been designed in the ancient province of Shandong. Names like Mu Zi and Lu Ban are often associated with the first of kites. The first known kite is believed to be the Wooden-Black-Earth Kite of this era. 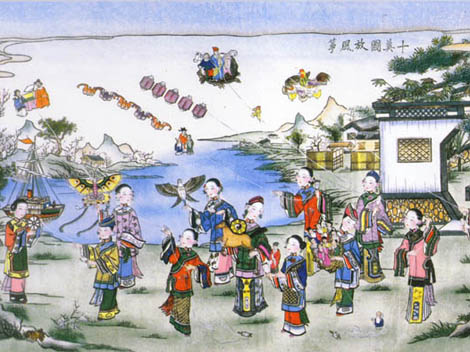 Ancient books on Ancient Chinese Kites often tell us about the primitive flying machines. The primary designs of kites in ancient China were generally composed of a wooden frame covered by paper and silk.

Making Ancient Chinese Kites similar in appearance to real birds made flying a new experience in itself. Kites usually had wings and legs like a real bird and could easily trick one from a distance. Herons were popular inspirations for the kite makers. 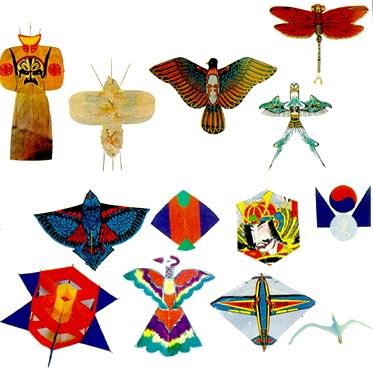 Centipede kites have unique characteristics like varying dragonheads and vibrant color combinations. The dragon occupies a very special position in Chinese mythology. It symbolizes prosperity, strength, and wisdom. As such these kites are the closest to their hearts. The serpentine body of the kite makes it an exact look-alike of the dragonfly. It indeed is an artists delight. 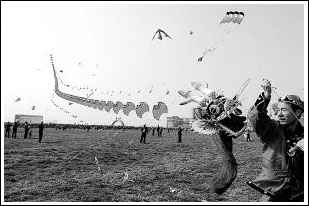 Hard Winged Kites are composed of bamboo frames arranged in the required symmetry. The frame is usually very rigid and has the paper or silk glued to it. These kites are known for their effective sails. Available in a wide range of colors they are usually hand painted.

Soft Winged Kites do not come with any rigid upper rim and are the most flexible of kites. It is composed of a couple of wings basically inspired from a rare goldfish. Other designs of this kite are inspired by different kinds of fishes, birds, and insects. Especially acknowledged for their visual appeal these kites are a treat to the eye.

Flat Kites are usually made into a single plane and their frame is quite rigid like the hard wing kites. The easiest to fly and control their long tails give stability to the flight. Edges of these kites are usually made in multiples of four based on religious beliefs. Available in a wide range of colors the most popular designs are the ones with a Ying-Yang symbol.