Chinese Poetry was the heart and soul of Chinese literature. Poems and songs have been the means of entertainment of men from the earliest times onwards. Records of Chinese poetry have largely been found, from which a substantial knowledge of ancient poetry of China can be obtained.

The various poems probably were compiled over several centuries, most of them during the Zhou period around 600 BCE. Chinese poetry was primarily written to be chanted or sung. It was composed orally and transmitted orally. It was written in different forms and modes. 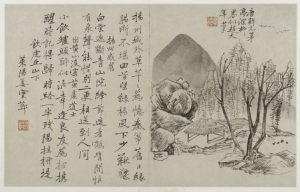 Various genres of Classical Chinese poems have been differentiated. Poetic persona is a feature of classic Chinese poetry. Persona is when the poem is written from the viewpoint of some other person.

Some poems are a commentary on the then contemporary society and life. Images and Symbolisms are deeply associated with Chinese poetry. Chinese poems, although apparently simple in the first reading have deeper and greater meanings when read intensively.

The earliest Chinese poetry begins with the Shih Ching or the Book of songs which is a collection of 305 poems. It was the first comprehensive compilation of Chinese poems.

Each poem in The Book of Songs was set to music and could be sung. Folk songs made up the most part of the book. Confucius, the great ancient philosopher was fond of this book and used to recite poems from it. It was the accepted textbook of the Confucian school, Shi Jing.

The Tang period, the golden age of Chinese poetry produced notable poems and compilations. the Qian Jia Shi [Poems by A Thousand Poets], was a popular textbook.

Tang Shi San Bai Shou or three hundred Tang poems belong to the year 1763 by Heng-tang-tui-shi of the Qing dynasty. This was used for very many years as a textbook to teach elementary students. In short, poetic education was imparted to the students.

Chinese poetic history is enormous and infinite. Different dynasties developed different forms of music. There were certain unique features of ancient Chinese poems. The use of parallelism was that where for two lines of a poem it would be expected that the reader would compare and contrast the meaning of two lines.

Antithesis refers to the often latent contradiction between two statements which when sufficiently considered can lead to the understanding of a third, unstated opinion.

Almost everything is the subject of Chinese poetry including marriage, agriculture, courtship, sorrows and joys, romance, heroic deeds and so on. Generally, each poem is usually composed of lines of four syllables. These syllables appear as four pictograms. The normal form of the courtship and marriage songs is three verses of four lines each.

Translations of Chinese poems are available in books and also online.