The term ceramic has been associated with China ever since history started being penned down in books. The country is particularly famous worldwide for its Ancient Chinese Pottery. Even in the dynastic periods, Chinese ceramic was as popular as it is today.

One reason of this might be the readily available resources for the making of these Chinese goods. A major chunk of Chinese ceramics is composed of hand-built pottery. This involves elements to be first shaped from the earth and then burnt by fire in bonfires or kilns.

In the year 2009, the Proceedings of the National Academy of Sciences filed a report which laid the claim that Chinese pottery dates back to 18,000 years. The evidence of the same was found in Southern China in the caves of Yuchanyan. This claim makes the particular piece of pottery the oldest piece of pottery which is yet found by mankind.

Other findings include that of in Xianrendong also referred to as the Spirit Cave. On this particular site, archaeologists found fragments of pottery which on proper examination was found to be dating back to 9000 BC. Other findings disclosed that this pottery was handmade by the process of coiling and was then fired in a bonfire. These potteries were also decorated with stamping and pierce markings. 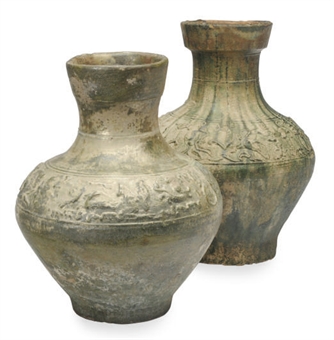 The site at Xianrendong is said to have been inhabited between 9000 and 4000 BC. Further research concluded that basically two types of pottery were made during this time span. The first and the more basic one was perhaps for everyday use as they were found to be coarse bodied. The other type included thinner and better-designed wares. These were perhaps for occasional use like rituals, etc.

Archaeologists have confirmed that both these wares were made at the same time and venue. Porcelain was yet another important discovery of the Chinese people. Experts often track down the first true porcelain to the Han Dynasty between 202 BC and 220 AD. The ready availability of porcelain building material like china clay etc gives a positive nod towards this theory.

Also finding Kiln sites in Eastern Han, the firing temperature of which is estimated around 1300 C is a substantial evidence for proving the making of ancient porcelain in these regions.

These wares were often also designed based on sculptural compositions. China has since then come a long way in the field of manufacturing ceramics and Ancient Chinese Pottery emerging today as a world leader in the same.