The ancient Chinese people believed that seismic events were associated with death, destruction and all sorrows. The seismic events were an indicator of gods will, send from heaven. So in case of any seismic disturbances anywhere in the country, the Han court should be aware of it.

The Look Of The Ancient Chinese Seismomete:

The original seismometer that was created by Cheng Hen was lost. However, the description of it is still available. From it we can guess what the original ancient Chinese seismometer looked like. 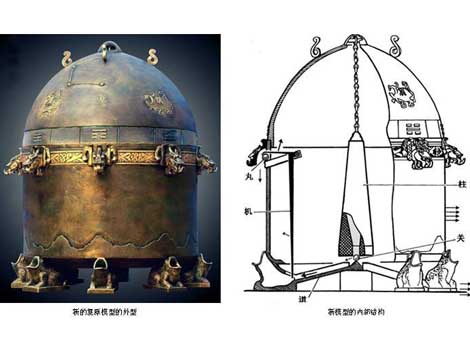 The structure of the seismometer was made out of bronze. It had a lid attached to it. It looked somewhat like a wine jar. The functions of the device were not visible from outside.

The outer surface was decorated with various designs on it. There were designs of mountains, birds, tortoises, animals and also of ancient writings were sometimes scribbled on it.

There were 8 dragons all around the device. Around the mouths of the dragons, a ball was placed. At the base region of the vessels, 8 toads were placed. They had their mouths open.

The ancient Chinese seismometer worked in an amazing way. A ball fell off from the mouth of the dragon when an earthquake was detected. This ball was den swallowed by a toad placed at the base. The toad swallows the ball in which particular direction indicates the direction where the earthquake is taking place.

The method in which the Ancient Chinese Seismomete functioned was never revealed. People believe that it functioned on the principle of inertia. A mass is kept hanging. In case of an earthquake, the entire vessel gets shaken. There is some amount of displacement in the mass that is fixed and the vessel. The lever transmits the movement. A ball is pushed out from the mouth of a dragon.

Was he aware of all the methods to go about it like the modern scientists? Or was it a matter of chance? Earthquakes are rare circumstances. So how will someone follow it? These are the common questions that probe into our minds when we see the ancient Chinese seismometer.