One of the most important things to be often associated with China is its specialty in making good Ancient Chinese Tea. The country is now a leader in exporting tea to the world. Offering a wide variety of tea to us China can be really branded as the tea capital of the world.

One of the unique features of Chinese tea is that it revitalizes your mind and body. Chinese have been producing quality tea for thousands of years now and their techniques of tea making are the best to give it a perfect blend. 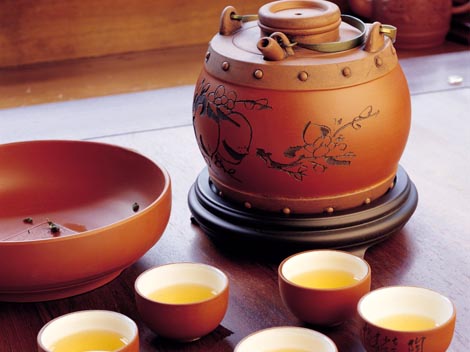 The origin of tea in ancient China will take you back to about 5,000 years from now. Though the real story behind this is not yet clear folklore has it that it was coz of the accidental brewing of tea for Emperor Shen Nung in about 2737 BC. The story speaks of the accidental falling of tea leaves in a cup of boiled water.

Tea first became popular for its medicinal use. The various health benefits of tea were perhaps known to the Chinese who incorporated this beverage as part of their daily meals. Most Chinese people still consume tea after meals knowing that it eases the process of digestion.

Tea drinking emerged as a popular trend in the publishing of The Classic Art of Tea by the poet Yu Yu in the 8th century. It was perhaps not known then that tea would become bliss in times come.

Tea houses started being built all over China with the increasing popularity of tea over time. It became so important that even emperors started gifting it to their subjects.

Though there are innumerable types of Chinese tea it is often broadly classified into four broad categories. The most popular tea known for its health quotient is the white tea. Its preparation requires the youngest of tea leaves to be plucked even before they blossom.

The special characteristic of green tea is that it isn’t fermented while processing the tea. The color of the tea leaves hence remain similar to what t originally was. The third and the more widely used one is the red tea also known as black tea.

The black color is coz of the fermentation of the leaves while processing. Oolong tea which is fermented partially is black and green in color. The fourth variety includes scented tea which is actually a combination of flower petals and oolong tea. Jasmine tea is a good example of a popular scented tea.