The ancient Chinese were involved in frequent wars of unification, expansion, and defense of their territories. They developed warfare on a sophisticated level to meet these demands. China produced massive infantry based Ancient Chinese Armies and navies who battled for control of the great rivers of China. 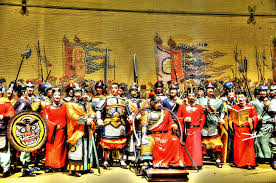 Earliest Chinese armies consisted of conscripted peasants armed with simple bows, spears and stone maces. Militarily they were the first in the Far East to use chariots and copper weapons, ideas brought by the steppe nomads from the Near East and Eurasian Steppes.

The armies created by Xia, Shang and Zhou dynasties were comparatively small and unprofessional. A core of warrior elites dominated battles from their Chariots; however, the early Chinese dynastic armies were poorly equipped and couldn’t manage long campaigns.

Ancient China army was made up mainly of citizens who served in the army for a period of two years at some time in their lives. During times of peace, the army was deployed to conquer peoples and bring more land under Chinese rule.

Chinese armies benefitted from military innovation and carefully organized logistics as well as a rich tradition in military theory. Martial arts, weapons and military constructions like the Great Wall of China that were developed during the imperial and the post-imperial periods hold a very prestigious position in the military history of China.

All able men between the ages of 23 and 56 were obliged to serve in the army for a period of two years. This meant that there was always a mobilized fighting force in ancient China. Soldiers had a relatively low status in society. They were not paid for their service but they did receive food and equipment. They were required to wear a full uniform which was also provided.

Warfare drastically changed during the era of the Warring States. The importance of crossbows and distant combat using archery was realized and also implemented. The concept of siege warfare greatly increased during this time. Mounted cavalry started evolving, and was put into use during this period. The army of the kingdom also developed intelligence agencies and deployed spies.

Now talking about the weapons used by the Ancient Chinese Armies – Dao was first used in China during its bronze age. During that time, long day, which has a one-sided blade attached to a long shaft, was popularized. Short day, or the broadsword, was also frequently seen among the infantry. Dao remained in use in Chinese armies until the twentieth century.

Ji was first used during the Shang Dynasty (17th century BC-11th century BC) when it was made of bronze. It was popularized during the Eastern Zhou Dynasty (770 BC-256 BC) when it was made of steel instead. By the Western Han Dynasty (206 BC-AD 25), it fell out of use in war, and by the Northern and Southern Dynasties (420-589) it was replaced in its entirety by Qiang (spear). Afterwards, it was used only as a weapon carried by ceremonial guards and as a weapon for martial artists.