The earliest armor in the Chinese history was used by the warrior of the Shang dynasty which was made from turtle shells tied together with cords. Later on, bronze and leather armor were introduced, and simple one-piece breastplates and lamellar cuirasses began to appear. Most of the Ancient Chinese Armor was highly elaborate and decorated and were often very heavy.

Ancient Chinese armor was usually made from metal or leather. Small pieces of leather and metal were overlapped and attached to the cloth. This provided protection but also allowed the soldiers flexibility of movement. Leather armor was usually lacquered to give extra strength. Dating from Han times, helmets were also worn. 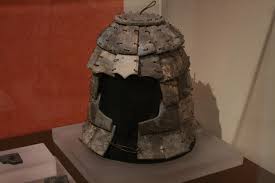 The brigandine plates of the Qin Dynasty armor were shaped differently, depending on which part of the armor they were made for. Pieces were rectangular, square, trapezoid, fish scale-shaped, or irregular. A stand-alone set of armor was unearthed. The brigandine pieces were laced together with copper strips.

The ancient Chinese war horse armor was sometimes made of steel lamellar rivetted between layers of fabric. Sometimes the familiar was made of leather pieces. The rivets showing on the outside of the cloth were what gave it the name of Dingjia, or “nail armor”. It is made of iron and leather. The decoration is in damascened gold and silver. There is a lot of detail. Look at the area above the eyeholes. There are little scrolls outlined with iron spheres.

The silk cloth armor is an armor which makes with silk cloth kind of textile, its structure quite dexterous, the contour is artistic, but does not have the defense capability, therefore cannot use in the actual combat only to be able the attire which uses as the military commander usually clothing or the meter weaponry.