Chinese people have been celebrating a seemingly endless series of festivals during the course of a year, especially Spring-time. Most of these festivals take place on important dates in the Chinese lunar calendar. 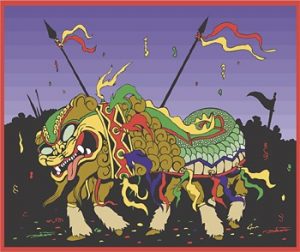 In the Chinese Culture, New Year begins on the first day of the first month in the lunisolar Chinese calendar. The festival, according to folk tales, started with a fight against Nian (a mythical beast). The ancient Chinese believed that Nian will not attack them if a food was offered to it. Since then, Chinese put food in front of their doors on the starting day of the festival. People prayed to the ‘God of Wealth’ with the hope that He will bring good fortune to the family.

The Duanwu Festival (Dragon Boat Festival) was celebrated to honor the death of Qu Yuan, a renowned poet and minister to the King of Chu in 278 BC. As the Chu was conquered by Qin, Qu Yuan committed suicide on the fifth day of the fifth month by drowning himself in the Milou River. The local villagers fed the fish so that they would spare his body; they also paddled out on boats to retrieve his body.

In China, millet and rice were harvested around the fourth and fifth millennium BC. It was divided into northern and southern styles of cooking. While the northern style represented oily foods with the flavor of garlic and vinegar, the southern Chinese foods were spicier and cooked with chili and peppers. Nutrition along with color, aroma, and flavor was the principles followed in the preparation of ancient Chinese food.

Just as important as the ingredients and presentation of each dish are, the table manners and courtesy among diners are very much a part of Chinese cultural tradition. The facility to partake of these delights is also distinctive – chopsticks! The use of two simple sticks in this way is an art in itself, also determining the way in which Chinese food is presented at the table.

According to ancient Chinese culture, there were certain rules for eating, for example, food was consumed while being seated in a sequence; finishing everything on your plate is not a good thing in China because if you eat all of your meal, the Chinese will assume you did not receive enough food and are still hungry.

Also, the Chinese traditionally believe in the medicinal importance of food, and that good cuisine has the effect of prolonging life, sustaining the constitution and promoting energy. Chinese Medicinal Food is a separate branch in itself, where herbs, roots and animal parts that are believed to be beneficial to health and well-being are consumed as part of the daily diet.