Below is a list of the most important Ancient Chinese Discoveries: 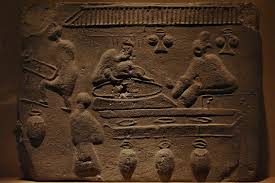 2. Circadian rhythm, recognition of: The Huangdi Neijing, compiled by the 2nd century BC during the Han Dynasty (202 BC 220 AD), noted the symptoms, behavior, and reactions of people with different diseases (i.e. of the liver, heart, spleen, lung, or kidneys) during different times of a 24-hour day.

3.Discovery of Decimal fractions: As proven by inscriptions from the 13th century BC, the decimal system existed in China since the Shang Dynasty (c. 1600c. 1050 BC). The earliest evidence of a decimal fraction, where the fraction’s denominator is a power of ten, appears on an inscription of a standard measure of volume used by the mathematician and astronomer Liu Xin (c. 46 BC23 AD), dated precisely 5 AD.

4.Equal temperament: During the Han Dynasty (202 BC220 AD), the music theorist and mathematician Jing Fang (7837 BC) extended the 12 tones found in the 2nd century BC Huainanzi to 60. While generating his 60-divisional tuning, he discovered that 53 just fifths is approximate to 31 octaves, calculating the difference at; this was exactly the same value for 53 equal temperaments calculated by the German mathematician Nicholas Mercator (c. 16201687) as 353/284, a value known as Mercator’s Comma.

5. First law of motion, partial description: The Mohist philosophical canon of the Mojing, compiled by the followers of Mozi (c. 470 c. 390 BC), provides the earliest known attempt to describe inertia: “The cessation of motion is due to the opposing force…If there is no opposing force…the motion will never stop. This is as true as that an ox is not a horse.”

6. Discovery of Gaussian elimination: First published in the West by Carl Friedrich Gauss (17771855) in 1826, the algorithm for solving linear equations known as Gaussian elimination is named after this Hanoverian mathematician, yet it was first expressed as the Array Rule in the Chinese Nine Chapters on the Mathematical Art, written at least in 179 AD during the Han Dynasty (202 BC220 AD) and commented on by the 3rd century mathematician Liu Hui.

7.Aware of underground minerals associated with certain plants by at least the 5th century BC, the Chinese extracted trace elements of copper from Oxalis corniculata, pictured here, as written in the 1421 text Precious Secrets of the Realm of the King of Xin.

9.Horner scheme: Although named after English mathematician William George Horner (17861837), the Horner scheme, an algorithm used to estimate the root of an equation and evaluate polynomials in monomial form, was actually first invented in China to find the cube root of the number 1,860,867 (the answer is given is 123).

10.Discovery of Leprosy, first description of its symptoms: The Feng Zhen shi ??? (Models for sealing and investigating), written between 266 and 246 BC in the State of Qin during the Warring States Period (403221 BC), is the earliest known text which describes the symptoms of leprosy, termed under the generic word li ? (for skin disorders).

11.Discovery of Negative numbers, symbols for and use of: In the Nine Chapters on the Mathematical Art compiled during the Han Dynasty (202 BC220 AD) by 179 AD and commented on by Liu Hui (fl. 3rd century) in 263, negative numbers appear as black rods and positive numbers as red rods in the Chinese counting rods system.

12.Snowflake, observation of its hexagonal structure: In his Moral Discourses Illustrating the Han Text of the Book of Songs of 135 BC, the Han Dynasty (202 BC 220 AD) author Han Ying wrote: “Flowers of plants and trees are generally five-pointed, but those of snow, which are called Ying, are always six-pointed. This was the first explicit reference in world history to the hexagonal structure of snowflakes.

This is a constant rule. If the comet is north or south of the Sun, its tail always points following the same direction as the light radiating from the Sun. In other words, as Robert Temple states, “the Chinese observations of comet tails had been refined enough to establish the principle that comet tails always point away from the sun.”