Ancient Chinese Food, governing a great nation is much like cooking a small fish. 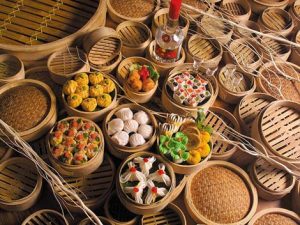 Chinese culinary history is one of the most interesting topics of study for the historians. Ancient Chinese enjoyed growing food and cooking. Chinese cooking dates back to about more than 5000 years. Chinese had complex systems of preparing Ancient Chinese Food which included steaming, deep frying, boiling, flavoring, roasting and so on and so forth.

Archaeological evidence points to the instances of rice farming along the Yangtze River. Wheat was not familiar to the Chinese and it was brought from West Asia. It was in 1500 BC during the Shang dynasty that the Chinese began to consume wheat. By 4500 BC, people in northern China were farming millet. Even before 3000 BC, tea was grown in China.

Soybeans, cabbage, peas, and cucumber were native to China in addition to fruits like oranges, peaches, apricots, and lemons. The ancient Chinese ate chicken and pork but the meat was expensive. Moreover, the Buddhists were averse to taking meat. It was consumed only in small quantities. The chicken was brought from Thailand. The tofu was commonly consumed.

In the Han dynasty, millet wine became very popular in the country. Noodles were also made of rice and wheat.

Ancient China Food may be divided into two categories; Northern and Southern. Both areas had distinguishable features favorable or unfavorable to the growth of certain crops. For example, Northern China was dry and cold and therefore rice could not be grown there. Northern dishes were generally oily, with intense garlic and vinegar flavorings. Dishes include buns, noodles, fried meat, pasta, steamed bread, pickles etc.

Use of chili peppers was common in the South. Ancient Chinese Food was therefore spicy and sometimes sweet. Rice and rice products were also common. The soil of southern region was suitable for rice cultivation.

Ancient Chinese Food was an important part of major festivals and celebrations. Each Chinese meal had fan and Cai. The fan was the cooked grain and Cai was the vegetables. The beer was consumed. Fruit juices were also part of their food culture. Preparation methods were generally fast and required only less heat. Salting, pickling, fermenting, drying were the common preservation methods.

The tea culture in China deserves mention. Tea was important as one among the seven daily necessities. Tea culture of this country is unique. Tea is consumed on all occasions in addition to being used in herbal medicine. The preparation and tasting methods of China also differ from that of any other part of the world.

The young offer tea to the elders as a sign of respect. Tea is also served to indicate apology. Tea is important even in the Chinese traditional marriage. The parents are offered tea by the groom and the bride as a sign of gratitude. The parents then bless the couple by drinking a portion of tea.

After a person’s cup is filled, he may knock his bent index and middle fingers on the table to say thank you to the other person who served the tea. This custom originated about 400 years ago in the Qing dynasty.