Extensive Mountains, fierce deserts, mighty rivers, vast plateaus and dense forests, Ancient Chinese Landscape was the land of all these and more. One of the most ancient civilizations, ancient China had immense physical and geographical potential.

Historians believe that China is where the Peking man lived, who has been credited with the first use and control of fire. Ancient China has made contributions that have benefitted the entire world. This is the land where silk, paper, gunpowder, compass, and printing originated. 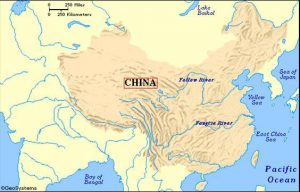 The civilization has seen six millennia of survival. The China that we know of today is the product of millions of years of evolution and struggle for existence.

Ancient Chinese landscape consisted of diverse topography and various physical features. The size of the country, which is around 3.6 square miles, encompassed all kinds of topologies possible.

Ancient China was essentially a mountainous country with two-thirds of the country covered in hills, mountains, and plateaus. West was mostly mountainous, the east had more of plains, and north covered in deserts. South China had plains and plateaus. South-east China which was mostly plains had flowing through it some to the most voluminous rivers in the world.

The ancient Chinese civilization flourished along the fertile Yellow river basin, in the eastern parts of China. The Yellow River, also known as Hwang He was infamously known as the river of sorrow because of the frequent floods the occurred along its banks.

From the high elevations in the west, literally thousands of rivers drain the country. Yangtze, Amur, Pearl, Mekong and the Brahmaputra are some of the stalwart rivers that irrigated ancient Chinas lands. East-Central China was the home to a fertile delta of the Yangtze and Hwang He rivers. The waters of these rivers had been the lifeblood of ancient Chinese civilization.

A landscape of ancient China had varying altitudes, the highest being in the south-west. The Qinghai-Tibet plateau here gave way to Kunlun and Qilan ranges in the north. The lowest level, the great plains of the east is where ancient Chinese civilization prospered.

Along with rivers and mountains, China also contained deserts and plateaus. Northwest China was the home to Taklamakan and Gobi deserts. The Gobi desert ran west to east while bordering Magnolia.

The plateau in the southwest was where the rich Tibetan heritage blossomed. These were mostly calcareous and cradled the highest peak in the world, Mt. Everest. The Liaodong and Shandong peninsulas added distinguishing features to the landscape of this country.

With the Yellow Sea, the South China Sea and the Pacific Ocean bordering it along with 14 other countries, ancient China surely enjoyed a special position in terms of geography. A rich concoction of the best creations of nature, the ancient Chinese landscape was indeed a treat to the eye.