Ancient Chinese silk can be traced back to seven thousand years ago when the first silk was traded through the famous Silk Road on its way to Europe. It was around 1 BC that the first consignment of Chinese silk which was known as service arrived in Rome after passing through many hands on the way. The word, service, was derived from the Chinese si or silk as Europeans in those days, referred to the Chinese as Sericians. 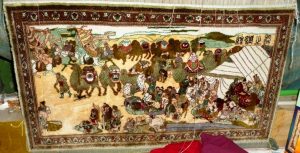 Goddess of silk and the Yellow Emperor

It was regarded as a unique import from the Far East and an integral part of great eastern civilizations. Till date, the earliest silk that was discovered dates back to around 3200 BC after it was excavated from a tomb. According to old Chinese folklore, the goddess of silk or the silkworm appeared to be the legendary ancestor of the Chinese people; the Yellow Emperor who defeated is an enemy, Chi You.

Silk fibers were presented from her mouth as a sign of respect and when the emperor ordered them to be spun into fabric; he found them exceedingly soft and comfy. Lei Zu, the emperors’ wife, belonging to the Xilinx clan, looked desperately for a particular type of caterpillar capable of automatically spinning silk fibers from his mouth. When she identified them, she bred silkworms by picking up mulberry leaves and feeding them on her own.

Silkworms cultivated in 3 BC

According to ancient Chinese silk history, the silkworm goddess was Lei Zu and the moniker of God of weaving rested on the Yellow Emperor. Throughout ancient China extending till the present, raising silkworms, cultivating mulberry and spinning silk fabrics have been an integral part of the economy and an occupation for laborers. The cultivation of silkworms can be traced back to 3 BC.

Even during the Neolithic Age, ancient Chinese silk was made after the flatbed technique was invented and natural dye was used to tint cloth. In later day China, more improved dyeing and printing methods came into vogue. China came to be regarded as the first nation to possess the most advanced silk dying methods present anywhere in the world.

Silk production and sericulture were managed by a special administration during Zhou dynasty. Ancient Chinese silk was a prized commodity among the noble people of Europe in those times. Wealthy people of the Roman Empire sought Chinese silk as they could not settle for anything but the very best.