The Chinese are renowned for their Ancient Chinese War Tactics and new weapons. The period from 475 BC – 221 BC witnessed an endless number of wars and battles. The Qin, by 221 BC established an empire in China. 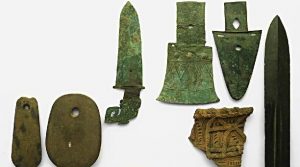 There were a variety of weapons used including dagger-ax, Crossbow, battering rows etc.

But what we examine here is the military strategy and techniques of ancient China.

It was the Qin which developed the crossbow which fired up to 250 yards! With the help of Iron casting techniques which had not reached the west until the 12th century, swords of iron were made as opposed to those of bronze.

There were great military strategists like Sun Tzu who wrote about military organization, tactics, and leadership in his book Art of War. The book originally had 6000 Chinese characters. It is regarded as one of the oldest and greatest books on military strategy. Emphasis is placed on the positioning, planning etc. The book consists of 13 chapters. In many East Asian countries, the book served as a syllabus for candidates for military service examinations.

The Thirty-Six Strategies is another collection worth mentioning. It is a compilation of ancient Chinese proverbs on the most important military strategies. It has a preface, six chapters and an afterword which was incomplete. There were Winning, Enemy dealing, attacking, chaos, proximate and defeat stratagems. Some of the strategies were Doublecross, a Frame job, Bait, and switch etc.

Some of the proverbs are:

1.Hide the Dagger behind a Smile.

2.Kill with a borrowed sword.

3.Toss out a brick to attract Jade.

The strategy is ‘Openly Repair the Walkway, Secretly March to Chencang’ is significant. No name of author or compiler has been mentioned for the Thirty Six Strategies. Many of the proverbs are based on events that occurred during China’s Warring States Era i.e., during the period from 403 to 221 BC.

Another strange strategy is sending beautiful women to the enemy! The opposition may forget their duties as they are attracted towards beauty. There can emerge jealousy, differences, aggressiveness, and envy. The strategy of sowing discord will undermine the enemy’s ability to fight by secretly causing discord between him and his friends, allies, advisors, family, soldiers and the people.

Others are the strategy of pretending to be injured, a strategy of combining tactics, retreat and regroup, feigning madness but retaining balance, luring the enemy to the roof and taking away the ladder, shedding your skin, befriending a distant enemy to attack a nearby one, borrow a corpse to raise the spirit etc.

One of the tactics of wars in ancient China was using of spies. There are five kinds of spies; Native spies, internal spies, Converted spies, Expendable spies and surviving spies. When all of these spies work together, it is called “The divine manipulation of the threads”.

The Hans established squadrons for war. Horse breeding stations were set up along the inner portions of the Wall. The Ming developed gunpowder, land mines, and cannons to protect. They also developed a highly effective strategy for the defense to protect The Wall.