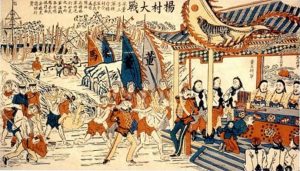 The very first sign of ancient Chinese warfare was recorded during the Xia dynasty which thrived from 2200 BCE to 1600 BCE. There were very frequent wars which included ones of unification, defense of territories and also of expansion. The ancient Chinese warfare had developed in a sophisticated level so that the demands could be met. Their armies were infantry based and they also had navies which would control the various Chinese rivers. The massive fleets would also be used to explore and to project the Chinese power.

The ancient Chinese armies ad managed to benefit a lot from the military innovation. They also had carefully thought out logistics along with a rich tradition in the military theory. The Art of War written by Sun Tzu can give us a good idea about the ancient Chinese warfare in the 6th century. China required a very strong army so that they could defend against internal rivals but also from the enemies which surrounded the entire China. From Asia, various tribal groups, as well as ethnic groups, would invade China.

At first, the Chinese thought that they weren’t a real threat. They would consider them to be dog people who were poor and weak and would use dogs to track for supplies. but then their image changed after the Aryans had arrived in chariots. The warriors had bronze weapons as well. The Chinese had gotten inspired by these. The armies in China were divided according to the dynasties. The first was the early Chinese armies and the ancient Chinese warfare in Xia dynasty.

The second type of military was found in the Shang dynasty. Then the ancient Chinese warfare included the Zhou dynasty military. This was followed by the warfare during the period of the warning states. The Chinese military also had the great impact on Imperial China. Hence we classify the warfare which was used in ancient China according to its time.