Ancient China dates back to 1200 B.C. and Ancient Chinese Landscapes has been captured in many paintings and art forms since then. Ancient China was a very picturesque place and we can observe some remnants of it even today. China has the Himalayas to the west. The Ancient Chinese landscape would show snow-capped mountains even in the summer. The region had very low temperatures during winter (around -60 degree Fahrenheit) but summers it would get hot (around 80 degrees Fahrenheit). As we all know Himalaya houses the tallest peak called Mount Everest. 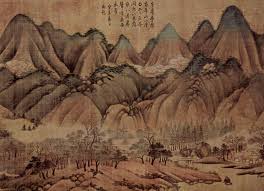 Central China is mainly a desert area having the famous Gobi Desert. The Ancient Chinese landscape did contain some hills but none which were snowy. The temperatures were true of the desert, having a hot summer and cold winter. The landscape has been drawn to look very serene in many paintings of ancient China.

In the east, China is bordered by the Pacific and two of its main rivers flow into it namely the Yellow River and the Yangtze River. This is the real china around which the civilizations of the past were developed. Men and women of ancient China inhabited this ancient Chinese landscape of pristine rivers where the culture was abundant.

North-eastern China is surrounded by deep mountain forests. The ancient Chinese landscape was dotted with spruce forests belonging to the Tianshan Mountain which has a landscape similar to Siberia. All kinds of deer, reindeers, and tigers inhabit these forests.

Now the southern part of China is extremely tropical and is occupied by rainforests. All kinds of medicinal plants are available here. The landscape is only visible to the ones who dare to venture into this area. Ancient Chinese landscape of the rainforests looks better when viewed from the top than inside.

Let me now cover a few specific cultural Ancient Chinese Landscapes which were known for their tourist attraction and the tradition continues to date.

West Lake is surrounded by hills on its three sides and has a mesmerizing ancient Chinese landscape. It has been declared by UNESCO as a world heritage site. It was a man-made site that depicted entry into civilization from the hills. It is the inspiration for many paintings and poems of ancient China.

Guilin has a unique landscape having limestone hills and the river Li passing through the hills. It must have been one of the best of ancient China landscapes as is evident by its popularity among ancient painters. It is famous for having the Osmanthus trees which produce a fragrance that shrouds the landscape.

This city is the most scenic among the ancient Chinese landscape cities. It is surrounded by the verdant mountains, rivers coursing through it and connected by some 300 bridges. The city has become a UNESCO world heritage city and there are plans to restore it to its initial glory.

Its one of the natural wonders of ancient China due to its location. Water itself is a rare commodity in deserts but the crescent lake is found right in the middle of Gobi desert. It’s in the form of a crescent much like the moon hence its name. It still gives you crystal clear water and makes a joyous contribution to the Ancient Chinese landscape.